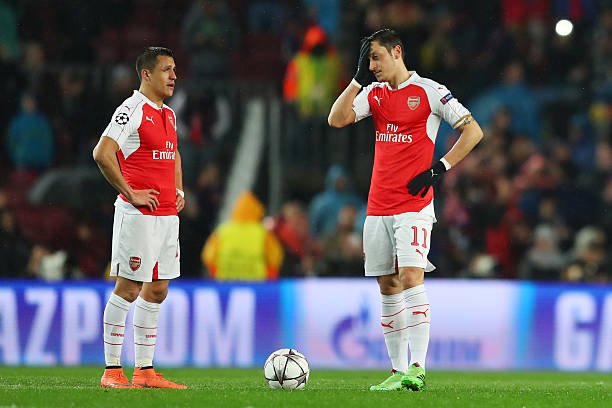 Arsenal secured their 3rd win of the season yesterday as they swept off West Brom Albion thanks to two goals from Alexandre Lacazette. Arsenal legend Thiery Henry has given his verdict on last night’s match and he believes that he is noticing something different at the Emirates stadium because he felt surprised to see Alexis Sanchez being substituted for a fit Mesut Ozil who was not given a start in that match something which has come as a big surprise to many because when Mesut Ozil was fit, it would be an automatic sign that the German will start the match.

Thiery Henry is an important and respected person to every gunner and is considered to be a legend at the club, and is still loved even though he became a pundit nowadays, the Frenchman made some remarks at the Sky Sports on what he observed in the Arsenal Vs West Brom Albion match;

“Now Ozil comes on and Alexis Sanchez comes off.”

“ Listen, there is something I have seen that I wasn’t seeing for a very long time with Arsenal and Wenger seeing what he did.” said Henry. (Info – Sky Sports)

What the former French forward is talking about id the incident where you see is when Alexis Sanchez and Mesut Ozil are fit, they are automatically brought back into the starting lineup but it seems like Arsene Wenger wants to make it clear that they aren’t more important than other members of the squad.

Arsenal are yet to renew the contracts of the duo and time is going meaning that the gunners are at a risk of losing these two for free when the season ends because there are no clear signs showing that the gunners are preparing to offer Mesut Ozil and Alexis Sanchez new deals before the Winter January transfer window opens but aside from all that, it seems the duo will have to work hard to keep up their positions in the starting eleven because their positions in every Arsene Wenger‘s starting line up is no longer guaranteed.

Thiery Henry says he also got shocked when Alexis Sanchez didn’t get a start when the gunners faced Chelsea at the Stamford Bridge last week and believes it was a right decision by the manager because it paid off and the team looked balanced. Many football pundits have countlessly urged Arsene Wenger not to always pamper Mesut Ozil and Alexis Sanchez too much because a team is not made up of two players but it seems the French manager has finally followed the advise.