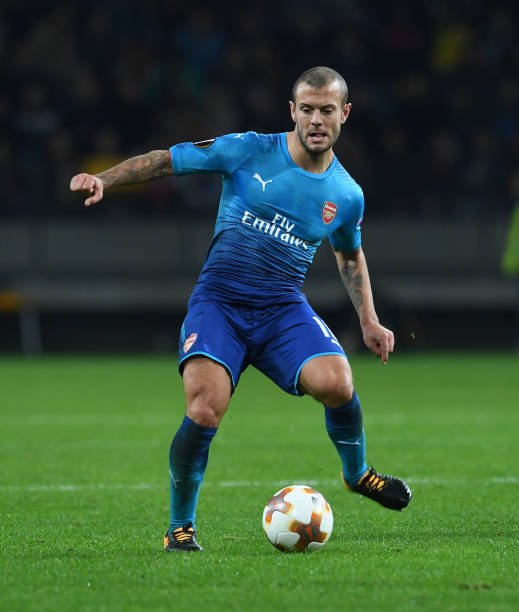 Arsenal midfielder Jack Wilshere took part in the gunner’s match against Bate Borisov yesterday and he had a pretty good performance. The English midfielder has seen appearances limited this season and he has been struggling so much to get back to the first team because he was first sent to the reserves by Arsene Wenger to go and shape himself until he finally was brought back but he hasn’t made any English Premier League appearance this season.

Most Arsenal supporters are happy that the Englishman played the full 90 minutes and will be hoping that he gets a free injury season because his footballing career has been struck with constant injuries and most people blame him for getting injured as they claim that Jack Wilshere makes reckless tackles and that the way he dribbles is vulnerable to injuries but neverless, yesterday he had a fantastic match and here was even named man of the match.

Our #BATEvAFC man of the match? That’s this guy #SuperJack

It had been a while since Jack Wilshere had an incredible performance so this was important for him as a player and for the supporters.

Arsene Wenger was all smiles after yesterday’s match and was impressed with performances of most players including Jack Wilshere who he thinks has improved;

“He fights until the end. He’s on his way back to his best and showed that. He’s at an age where a player normally gets to the best of his career. He’s on the way up. He’s only been stopped by a series of injuries.” said the manager. (Info – MIRROR FOOTBALL)

The manager also hopes that the midfielder tries to have a season without hindrances which could keep him out of the squad and put him on the sidelines.

Jack Wilshere has always stressed out the disappointment he gets when he gets injured all over of a sudden because he is tired of being on the sidelines and not to forget, he is getting old now meaning this is the perfect time for a player to shine. The midfielder took to Instagram to thank the fans for their support and congratulated Olivier Giroud on reaching 100 goals.

80.7k Likes, 1,176 Comments – Jack Wilshere (@jackwilshere) on Instagram: “Another 90 minutes and another win. Thanks to all the @arsenal fans for the amazing support and get…”

Jack Wilshere will be hoping that his performances in the Europa League earn him a spot in Arsene Wenger‘s team to face Brighton Hove Albion after the international break.

Why Arsenal Supporters Should Not Underrate Ozil’s Services

Analysis: Time For Wenger To Start Nelson In EPL