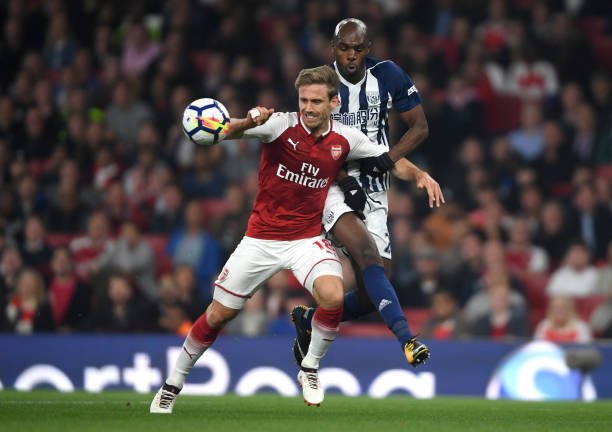 Nacho Monreal was among the players that helped Arsenal beat West Brom Albion last night thanks to his courageous work at the back line and most gooner’s believe that this has been his best performance in years because they usually blamed the Spaniard for poor marking of opponent players. Nacho Monreal has been played in different positions as he was playing as a left back in Arsenal‘s old 4-2-3-1 formation where he was handling left back wing but he started on the left in the three-man defense last night and that move or decision by Arsene Wenger paid off as the 31-year-old made six interceptions in the match.

Nacho Monreal joined the gunners in January 2013 and he has since established himself in the starting lineup and is among the type of Arsenal players who finish the injury season free. The left back has maintained his position in the left back position as he has beaten off competition from Kieran Gibbs who finally left the gunners because he thought that he got no chance at the Emirates stadium. Most football analysts are surprised to see the Arsenal lineup containing both Sead Kolasinac and Nacho Monreal in the same match at once because they thought that since the Bosnian international arrived at the Emirates stadium, that this could mean that Monreal’s future at Arsenal is over.

Nacho Monreal had a good game last night and the gunners have maintained their home record as they have not lost any match when playing at the Emirates stadium. Arsene Wenger was all smiles after the match and praised Nacho Monreal and Mohammed Elneny;

“They were outstanding, both of them. I am pleased for both of them of course, but especially for Elneny because he has not always played, but what he did tonight was very positive. The two of them are top players who have a fantastic mentality.” Said Wenger (Info credits – arsenal.com )

It is’nt known whether Wenger will make many changes to the lineup that started yesterday.

Nacho Monreal was very satisfied with the performance he showed against Tony Pulis’ men and is glad that he also played a vital role in the home win and here is what he said after the match!

“We knew it was going to be a hard game but I think we played better than them, we scored two goals and in every moment we had the control. They only had one chance in the first half but I was so lucky to be in the right position at the right moment. After that, we were better than them. It was hard but we played a good game.” said the Spaniard. (Info credits – arsenal.com )

This has been one of the best performances showed by Monreal.