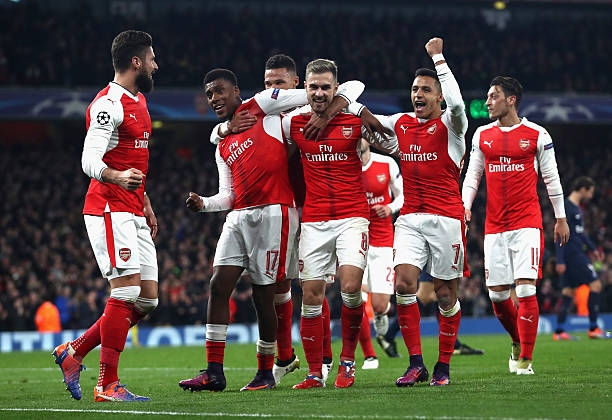 There has been various reports suggesting that Mesut Ozil will be leaving the Emirates stadium this January or next year’s transfer window. Nigerian golden boy Alex Iwobi was asked about the situation of the duo and here is what he told the The Sun;

“They have a big decision to make. But it would be a huge setback to lose them because from the stats you can see we do need them for their goals and assists. ” said the winger. (Info EXPRESSS SPORT)

Alex Iwobi became the hero for his country yesterday after he scored a goal that sent Nigeria to next year’s World Cup and the young winger will be hoping that he improves his playing style and get chances in order to be among the Nigerian players to be selected to travel to Russia.

Alexis Sanchez and Mesut Ozil yet both yet to sign new contracts in order to extend their stay at the Emirates stadium because per the current contract terms, the duo will be free agents in next year’s summer transfer window but it seems that they are not willing to wait out that long and are planning to offer a transfer out request in January but Alex Iwobi believes and hopes that they do not leave because they have a lot to offer. Here is what he said;

“For a team like Arsenal, we need to be aiming for the top four and we need what they bring.” said Iwobi. (Info – EXPRESS SPORT)

Alex Iwobi is known to have a special connection with Mesut Ozil and Alexis Sanchez than other players and respects them very much because he sees them as his mentors at the Emirates stadium and it is no surprise that he is the first player to come out and speak about the situation of the duo and sympathises with them because he wouldn’t want to be separated from them just yet and even says that its always an honour for him to train with them.

Alexis Sanchez and Mesut Ozil have never came out open and speak out what they have to say about the recent speculations over their futures but Arsene Wenger has always assured and agitated that the pair will not leave the Emirates stadium in January and says that the new contract talks will begin soon. Alexis Sanchez is starting to look lively when playing in an Arsenal jersey because he looks happy and was even very impressive when the gunners played Brighton & Hove Albion a week ago while as for Mesut Ozil, he has not yet started the last three Arsenal matches due to injury but he has been posting videos of him training to show his progress.

Round Up Of Today’s Arsenal News