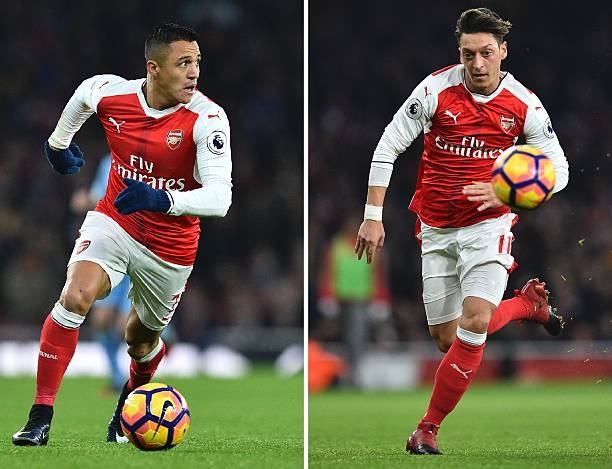 The gunners received the worst news they did not wish to hear today as Arsene Wenger condition confirmed that the gunners were at a risk of losing their star players Mesut Ozil and Alexis Sanchez in the January transfer window. According to the statement made by the manager, it seems Arsenal have tried everything thing they can in order to convince the duo to stay but it is reported that the two are no longer interested in staying at the Emirates stadium.

This is a very bad time for Arsenal supporters they will be going to will be going to the stadium to watch and support the club but what will be disturbing is that the fans will not know whether to cheer these contract rebels when they score because it isn’t that easy to cheer up the contract rebels but the conclusions are all over social media with fans speaking at what ever is on their minds but there hasn’t been any official announcement from Mesut Ozil and Alexis Sanchez.

Mesut Ozil and Alexis Sanchez are considered to be the best two players Arsenal has but some football pundits believe that Arsene Wenger makes them feel special as if they are the only good players in the squad hence being stubborn. These two all have their contracts running out in next year’s summer transfer window but there has been constant rumours suggesting that the duo are impatient to wait for next year’s summer and are hoping to leave Arsenal in January.

Mesut Ozil has not started the last three Arsenal matches due to a slight injury but there are some certain reports that say that the German international is faking the injury and making it is a way to show that he wishes to leave. Alexis Sanchez on the hand was starting to get back to his best because he had a remarkable performance against Brighton & Hove Albion two weeks ago with some gooners hoping and saying that the Chilean had finally forgotten about the summer transfer window saga over his future. It isn’t known what action Arsene Wenger will do to restore order in the club.

Analysis: Should Wenger Bench Iwobi Since Welbeck Is Back