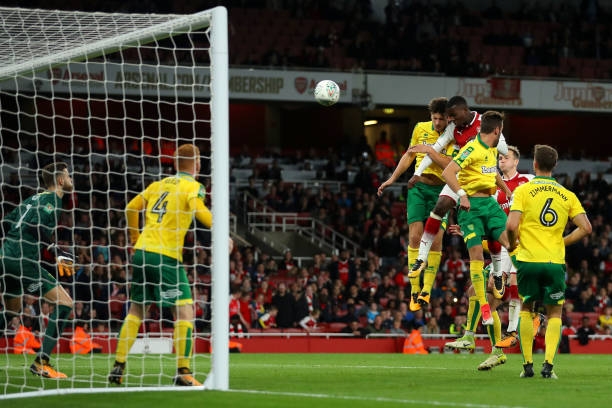 The gunners have progressed to the next round of the EFL Cup after successfully beating Norwich City at the Emirates tonight with youngster Eddie Nketiah being the hero as he helped Arsenal come from one goal down to winning the match in the extra time. The 18 year old saved Arsene Wenger from what seemed to be going to be a big embarrassment to his team by sticking the back of the net twice to gift the gunners a hard fought win.

The gunners started the match poorly as they conceded a goal in the 34th minute of the match which changed the whole game and made Arsenal try to sit back in order to prevent the Carnaries from scoring the 2nd goal which could have been an even bigger problem because the gunners aren’t a type of club that can come from a two goals down to win matches. Arsene Wenger panicked in the 2nd half and had run out of options but then decided to introduce Eddie Nketiah who became the un likely hero who even first prayed before going into the pitch to play.

This competition is a very short cup campaign which the winner is usually crowned in February so there are a few clubs left in the competition giving the gunners a perfect chance to finally obtain this cup because Arsenal has never won it ever since Arsene Wenger took over in 1996 and the French manager usually says that he does not value this competition because he sees it as destructing because it affects the scheduling of English Premier League. The gunners started the with their 2nd team which was also consisting of some youngsters like Reiss Nelson and Maitland-Niles who played well despite not being at their very best.

The gunners will be hoping that most big teams get kicked out of the competition before meeting them but Manchester City also qualified today and will be going to next round.

CHECK HIGHLIGHTS OF MATCH BELOW:

Disclaimer: The videos above do not belong to us and credit goes to whoever made and created these videos. We won’t be responsible if they are taken down but we apologise if that happens.

Eddie Nketiah was the star of the day after scoring the two goals that helped his club win the match but he even also made a record of being the first player born after Wenger was took in charge as a manager in October 1996 to score a competitive goal for Arsenal. Gooners will be waiting for the EFL Cup draw which will take place on Thursday and will be hoping for a fair opponent.