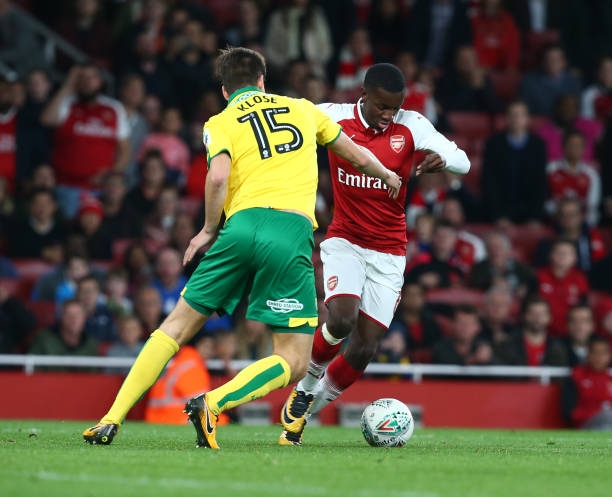 Eddie Nketiah became the hero for the gunners on Tuesday when he scored a double against Norwich City but the player says Arsenal saved his career.

The 18 year old became the talking point on Tuesday night after he showed a fantastic performance against the Canaries by finding the back of the net two gift Arsenal qualification to the next round of the EFL Cup. The youngster was first at arch rivals Chelsea before he joined the gunners and the player spoke how the blues almost ruined his career;

The youngster says: “The day Arsenal showed interest in me was one the happiest days I can remember’

‘‘It was not only because I have always been an gunner’s fan, but two days earlier I was told I would be released by Chelsea and would not earn a scholarship for the next season. ” The young Englishman is quoted by METRO.

The young forward says that he recalls that moment and is always grateful to Arsenal to have a made a move for him and he will be hoping he progresses well until he finally gets chances to play in the English Premier League.

Arsene Wenger even said that he was wasn’t sure why Chelsea released the youngster in the first place because he has been scoring goals at the youth level which might just be enough for a player of that age. The manager is one of the few coaches who give young talented players a chance to show their worth.

Related Topics:ArsenalChelseaEddie Nketiah
Up Next