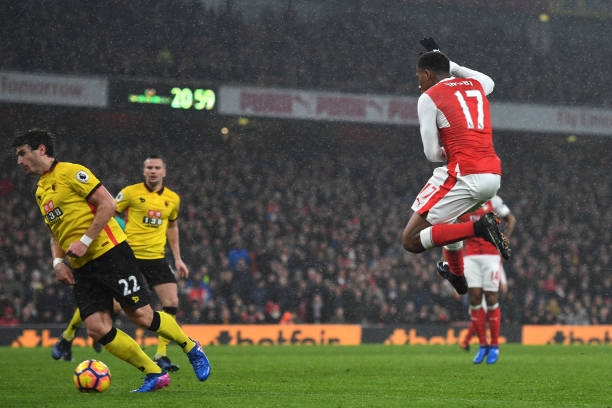 The English Premier League gets back today with the gunners taking on Watford at its stadium called the Vicarage. The gunners have started the season have started the season on a poor note but have slowly started getting back to their feet as they are un beaten in their last five matches.This will be a very tricky match for the Arsenal team because they have been very poor when playing away in the EPL.

ARSENAL TRUE FANS would like to take this opportunity to bring you it’s expected Arsenal lineup to face the hornets later on in the day.

GOALKEEPING: Arsene Wenger is expected to give Petr Cech a start because the manager usually starts first goalkeeper in EPL matches.

CENTRE BACKS: Shkodran Mustafi has got injured and Laurent Koscielny is also from an iniury so Arsene Wenger is expected to give starts to Nacho Monreal, Rob Holding and Per Mertasacker.

DEFENSIVE MIDFIELDERS: As the gunners have been playing, it seems Arsene Wenger has finally found his two perfect midfielders; Granit Xhaka and Aaron Ramsey are also expected to be given a start.

ATTACKING MIDFIELD: Arsenal’s first choice attacking midfielder Mesut Ozil is back from injury and is expected to start the match alongside Alexis Sanchez.

STRIKING: Arsene Wenger is expected to give another chance to gunners record signing Alexandre Lacazette so that the Freshman shows his talent.

Analysis: Is Lacazette Failing At Arsenal

Analysis: Should Wenger Bench Iwobi Since Welbeck Is Back