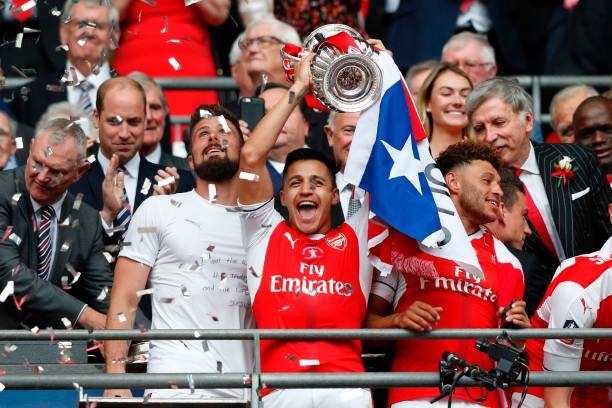 The gunners have been trying to tie down Alexis Sanchez at the Emirates stadium but Everton are the latest club said to be interested in the Chilean.

Alexis Sanchez has got only a few months remaining on his contract and it seems the Chilean international hasn’t accepted or instructed his agent to hold negotiations with Arsenal over a new deal.

Everton are said to be interested in the 29 year old international and are ready to go into a bidding war with English giants Manchester City who are also ready to bid for the Chilean international, the toffees are currently relegation threatened so they are looking for options to improve their attacking man power.

Manchester City are said to be willing to wait for the 2018 transfer summer to get the winger according to METRO butit seems they will now be missing out on their best chance to capture the signature of the Arsenal man because it seems Everton are very keen on making this miraculous transfer happen.

The toffees will have to double the amount which the gunners paid for the services of Alexis Sanchez from Barcelona because Arsene Wenger will need a good sum of money in order to find a suitable replacement for the player who is considered to be on his way out of the Emirates stadium.

The Arsenal supporters and football analysts are urging Alexis Sancheznot to leave the Emirates stadium because they think the Chilean international has started building a great partnership with Mesut Ozil and Alexandre Lacazette something the fans have been craving for in months.

Man City Make Plot To Get Sanchez With No Effort