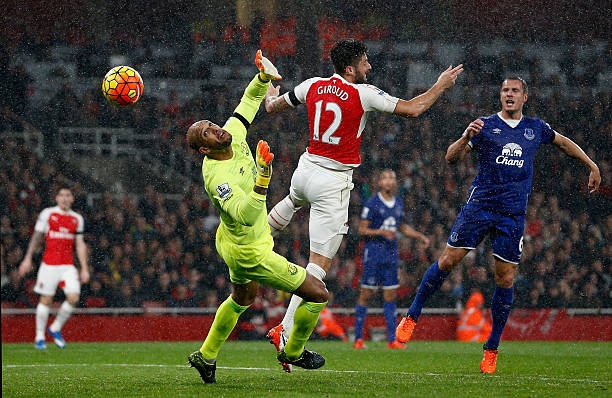 The English Premier League gets back this weekend and the gunners are facing Everton on Sunday as the gunners hope to get back to winning ways after their embarrassing defeat to Watford last week on Saturday. The Arsenal squad will be playing at the Goodison park on Sunday as they hope to end what seems to be an away curse because the gunners have been underperforming in the English Premier League when playing away from home and this has become a big worry for supporters who are always afraigd now to watch away games.

Arsenal will go into this match with bit of too much confidence than the toffees because they recently defeated Red Star Belgrade in the Europa League thanks to a spectacular goal by Olivier Giroud while Everton got defeated. Most gooners believe that it is the perfect time for Arsene Wenger to start giving Giroud more playing time in the EPL because he has shown that he is capable of leading the gunner’s attack in the upcoming matches which seem to be pretty tough but most football analysts believe that it is better for Olivier Giroud to start on the bench than him playing the 90 minutes. Arsenal are currently 6th on the EPL table with 13 points while Everton are having only 8 points at the 16th position which is just one place below the relegation zone.

The fixture between Arsenal and Everton is a remarkable fixture in the English football history because these teams have been meeting each other for decades now ever since their establishment 100 years ago. These two have met each other a whooping 208 times and it’s Arsenal that has won most of those encounters as it has beaten Everton 103 times, lost 60 and drawn 45 matches. Arsene Wenger has been urging the supporters to get behind the team and support it whole heatedly because he believes that the club is not yet out of the title race and will be hoping that they bounce back by proving that they are still title contenders despite having a poor start to the 2017/18 season.

PREVIOUS 5 MEETINGS BETWEEN ARSENAL AND EVERTON

The gunners will be hoping to secure the three points because they would like to go into the top four for the first time this season. This match will take place on 22nd/Oct/2017 at 13:30 GMT.