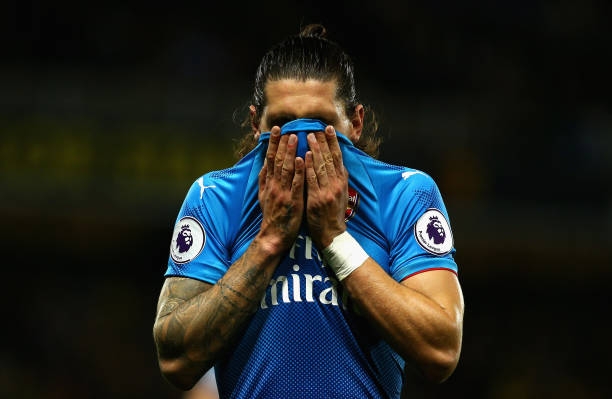 The gunners were defeated yesterday by the hornets thanks to a late winner goal which ended the hopes of Arsenal’s chances of collecting any points at the Vicarage stadium. The gunners started the match well and we’re looking lovely and determined to win the match in the first half of the match and all their work was fruitful as their captain Per Mertasacker headed the ball past the Watford goalkeeper and into the back of the net. It was a very unfortunate day for the Arsenal travelling fans who thought that their team was coming for a win and nothing else but it came as a shock as they saw walking out of the Vicarage stadium after getting defeated. The Arsenal supporters do not know who to blame as they are un sure if it was the fault of the players or the manager.

The gunners are currently sixth on the table after wasting their best chance to make it into the top four last night after showing an embarrassing performance. Arsene Wenger was very un happy about the result but he also says that the penalty that the referee gave to Watford wasn’t a right call according to the French manager. Here’s what he said;

I don’t know. I don’t see any pre-conceived idea. I just think the decision is wrong and that’s it. It came at a moment in the game where it was absolutely important for Watford. [If there was] no penalty, [there’d have been] no goal.” said Wenger. (Info – arsenal.com)

Other gooners aren’t minding about whether the penalty decision was right or wrong but are very bitter with Arsenal’s first choice goalkeeper Petr Cech who has failed to save any penalty while wearing the Arsenal jersey and have already started urging their manager Arsene Wenger to bench the former Chelsea man because the Czech Republican has gotten too old.

The gunners had started had begun rebuilding themselves after the embarrassing 4-0 loss to Liverpool some month ago and they were un beaten in their last five matches before finally losing again Watford in a dramatic mood. Most football analysts usually say that Arsene Wenger is very good at silly excuses and the French manager says that his squad was just un lucky and deserved to win.

“It is, but if you look well at the game today, I think with a bit more killer instinct in front of goal, we should have won the game. That’s where we are guilty. The decision on the penalty we have no impact on at all. Not everybody is at the same level physically, that’s for sure, but I feel despite that, we should have won the game.,” said the manager. (INFO – arsenal.com)

The manager will now have to go and regroup and discuss with his players one on one in order to find what the problem is and how he can try and fix it.

The gunners are now currently 6th on the table yet they had a big chance of making their way to the top four and now Arsenal supporters believe their club will never change as it is always disappointing them in a time they need it win matches. It is now quite clear that Arsene Wenger’s men aren’t title contenders because if they were, they wouldn’t lose to clubs such as Watford. Arsene Wenger strongly believes that his team had everything under control until the referee awarded them a penalty.

“I don’t want to interfere too much with the referees and their decisions and what’s going on. I just want the right decisions to be made during the game.” said the manager. (INFO – arsenal.com)

Arsenal will now need to focus on the next match because they have lost last night’s match and the supporters are not happy with them.