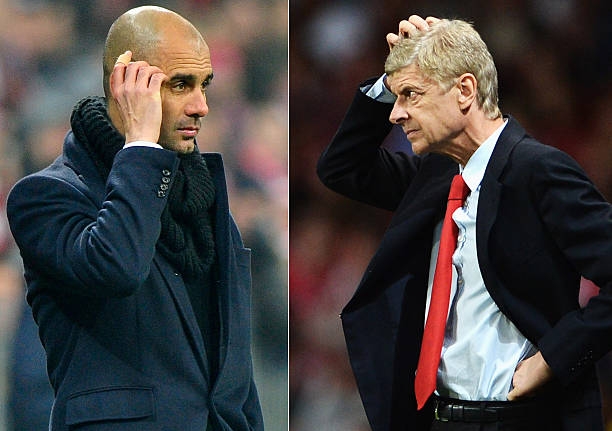 Manchester City have been outstanding this season and are currently 5 points above from the 2nd placed team while the gunners have been finding this year’s campaign very difficult for them. There are some football analysts who have started saying that Pep Guardiola’s men are capable of repeating history set by the Arsenal invincibles who went the full season un beaten which has never been repeated since 2004.

Pep Guardiola seems to have started fitting in the English Premier League as his club have been winning with huge goal margins and the manager was asked if he thinks he can emulate the invincibles, here is what he said;

“If you ask me if we can finish the season unbeaten I say that cannot happen. ’ the manager told Daily Star

‘There are a lot of games, a lot of competitions and we have to focus every three days, but there will be a moment when we go down.”

The gunners got excited on Saturday when Manchester United got defeated because they don’t wish any club aside from them to break that record until they are the ones who have done it, however they have already lost many games so going un beaten this season is impossible now.

Arsenal became the very first club to go a full season un beaten in 2004 and that squad was named the invincibles with Arsene Wenger being the manager that made that record of going 49 matches un beaten which was later stopped by Manchester United. The gunners have never won the English Premier League ever since 2004 and most supporters see that season as a curse because they have totally failed to win another EPL trophy with a lot of failed attempts.

Most football analysts and pundits have always urged the Arsenal board to sack Arsene Wenger even though he has made a lot of achievements including that 2004 season where they went full season unbeaten. It seems the gunners are too attached to Wenger yet his tactics are outdated these days in this modern football world. Arsenal have been fantastic this season at home but have been finding away matches very challenging for them.

Arsenal Legend Gives Out His View On Ozil’s Performance