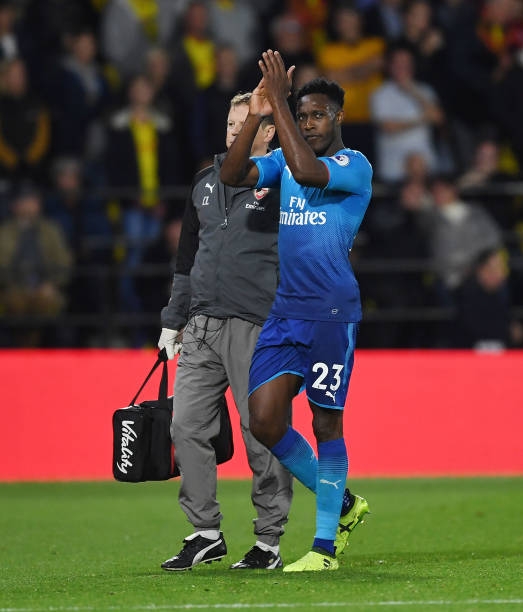 The gunners has always been a club that is usually disturbed by injuries in almost every season. Arsenal were hoping to have an injury free season in this year’s English Premier League campaign. Arsenal midfielder Danny Welbeck recently recovered from an injury and he was then taken into the lineup right away by Arsene Wenger but the decision by the manager turned out to be poor decision because the player was taken off the match due to another injury but it hasn’t been stated whether it is serious or not.

Arsenal defender Shkodran Mustafi is also already at the sidelines after he sustained a thigh injury during the international break when he was playing for Germany in their bid to qualify for FIFA WORLD CUP. That injury also seems to have affected the gunners a lot of because Arsenal had rebuilt their backline after their embarrassing 4-0 defeat to Liverpool because the back three that played against Watford looked like they were not used to playing alongside each other.

Arsene Wenger has always said that he feels that him and his squad are very un lucky because he usually loses his star players due to injuries every season. The French manager gave the latest on injuries of Laurent Koscielny and Danny Welbeck who were both taken out before the match ended;

“It looks to be a hamstring with Welbeck, he said. “I don’t really know because everybody is shocked in the dressing room [about the result]. It looks a muscular problem. Koscielny is a muscular problem as well.” said the Arsenal boss. (INFO – arsenal.com)

The gunners will be hoping that their injuries do not become serious because they wouldn’t wish to lose another player yet they are in a bad time where they are underperforming.

Arsenal manager and their supporters have always blamed injuries for the failure of winning the English Premier League trophy and statistically, this might be true like in the season when Leicester City won the EPL a few years back as the gunners finished 2nd on the table, but that season seemed like it was gonna be the season Arsenal finally win it but then they got disappointed as their star player Santi Carzola got injured and was ruled out for months. The Spaniard is even injured currently.

Analysis: Is Lacazette Failing At Arsenal