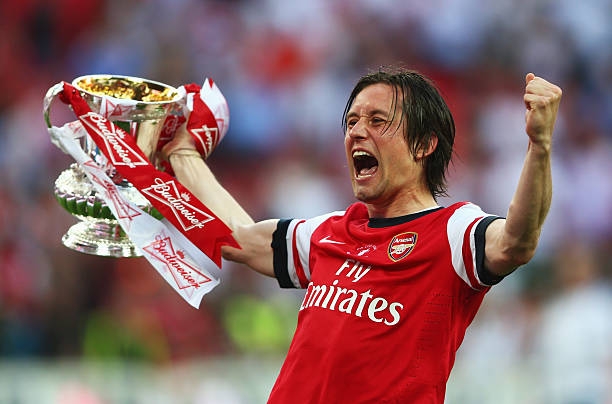 Tomas Rosicky joined the gunners on 23rd, May in 2006 and he has since established a name that will never be forgotten in the city of London and all gooners all over the world. The midfielder is known for his spectacular ball control skills which made him famous and loved, today is the birthday of the Czech Republican international so we thought that we can take a look at the top ten Arsenal goals to be scored by the 37 year old.

Tomas Rosicky was nicknamed the little mozart because of his ability to orchestrate the midfield. The midfielder made his last appearance for the gunners on 30th of January 2016 but it was then revealed that he had sustained a thigh injury which could keep him out for another month while he was still from injury so it was quite clear that Tomas Rosicky was gonna quit before it was even announced on the final day of that season.

The 37 year old returned to his fomer club AC Sparta Prague and he made his first appearance for that club and surprisingly scored the winning goal in that match. The gunners have had many players in the past but there is none who was passionate as Tomas Rosicky.

Related Topics:ArsenalTomas Rosicky
Up Next