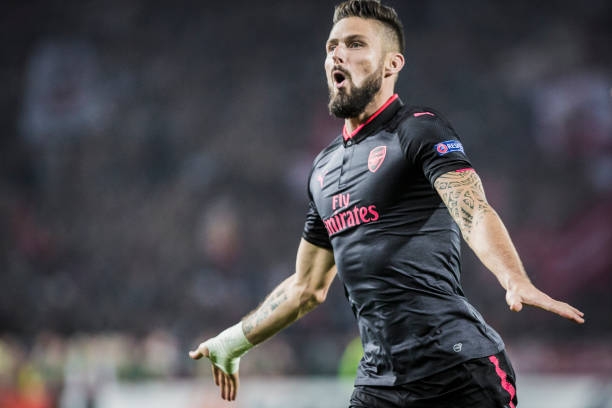 The gunners beat Red Star Belgrade thanks to a beautiful goal scored by Olivier Giroud who put the ball behind the net after a great lineup with Jack Wilshere. Arsenal looked frustrated through out the whole match after failing to get past the fantastic defense showed by the Serbian club who really looked ready to put up a fight.

Arsene Wenger has confirmed what his French striker Olivier Giroud told him on the touchline before he scored;

“Well at some stage he came to the touchline and told me he would score. I don’t know [how he knew but] that’s certainly no more than I did, but I think that’s Olivier Giroud.’ The boss told arsenal.com

‘He keeps belief when it’s tough and that’s why maybe he scores as well at moments you don’t necessarily expect him to score.”

The gunners are very happy with Olivier Giroud because has become a player that scores for them viral goals but it isn’t known whether Arsene Wenger will try giving the. Frenchman more chances in the English Premier League after the striker showed an incredible performance in Serbia and was the hero to help Arsenal collect all the three points.

Olivier Giroud hasn’t started any English Premier League match that this season because the manager prefers starting the fellow French striker Alexandre Lacazette but fans are now urging Arsene Wenger to drop their record signing because it seems like he has totally failed to adapt to the playing style of the North Londoners but has scored four goals with one of them being from a spot kick.Arsenal have now won three matches our of three matches and have obtained a maximum of nine points and are currently at the top Of their group H table. The gunners are hoping to finish the group stage matches as group leaders in order to get a fair round of 32 draw.

Wenger Says He Has Noticed Something Good In Team