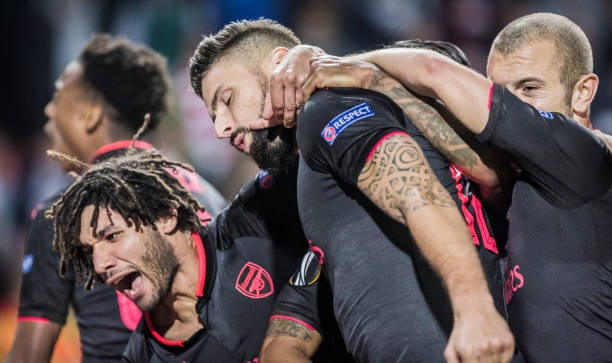 Arsenal will be welcoming Red Star Belgrade at the Emirates stadium today as they hope to keep up their Europa League winning streak.

Arsenal will come into this match with a lot of confidence because they are already almost on a safe zone as they will still remain at the top of their Group H table even if they lose to Red Star Belgrade today.

The North Londoners have been enjoying themselves in the European league this season as they have so far obtained all the 9 points from their first 3 matches of Europa League after finishing about two decades without taking part in the competition. However the gunners being in the better side of their group table, their opponents Red Star Belgrade will be needing this win so much in order to keep their chances of qualifying alive.

Arsene Wenger has always started youngsters in the group stage matches of the Europa League and that fact might still remain not until the knock out stage begins, so this today’s match will have a lot of teenage players alongside some players that haven’t been regulars in the English Premier League like Olivier Giroud, Jack Wilshere and many more others. so this will be the chance for them to impress the manager.

Arsenal salvaged a win against Red Star Belgrade in their recent Europa League encounter with Olivier Giroud being the hero who helps goobers obtain three points but they will this time be in advantage because they are at home at a stadium they are used to.

Both Arsenal and Red Star Belgrade have the same record in their last five matches as they. have recorded only one loss in their previous five matches. Arsene Wenger says that Jack Wilshere is ready for today’s match according to a report by   FIRST POST.