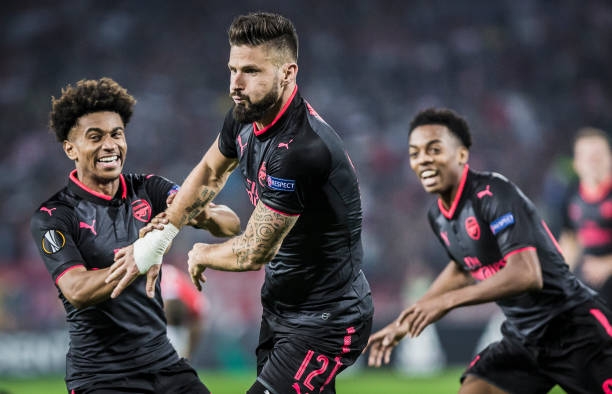 Olivier Giroud has had chances limited this season and the Frenchman is frustrated by the fact that he has never started an English Premier League.

The French international has been at the at the Emirates stadium for months years and he has been an influential player for the gunners because he has already scored over 100 goals for Arsenal.

The striker is currently on international duty with his country and he scored a goal in this week’s international games, Olivier Giroud has opened up on his future;

“For the moment I am not questioning myself about my future.’ the striker is quoted by Daily Star.

“I’m happy at Arsenal and I am fine with the decision to stay because I want to.’

‘I am thinking that the story between the club and myself is not over and not finished.”

The gunners will be happy with the statemens made by the French international because he has been very helpful for Arsenal like in matches against Leicester City and the Europa League match against Red Star Belgrade. Most gooners will be hoping that Arsene Wenger starts giving more chances to the 31 year old because he has proved that he can be a great goal poacher.

Arsenal obtained Alexandre Lacazette from Lyon on a record fee in the summer and ever since then, Giroud has become a back up striker who plays second fiddle to the new signing but most football analysts believe that the Arsenal manager for always bringing Olivier Giroud in the 70’s because they believe that’s the best time that the Frenchman performs well rather than starting the match.

Olivier Giroud was linked with a number of clubs in the summer including Everton and the sacked manager of the toffees said that. he wouldn’t have been sacked from the club if he had obtained the services of Olivier Giroud who denied the chance to leave the Emirates stadium because he says that his business with the gunners isn’t finished.