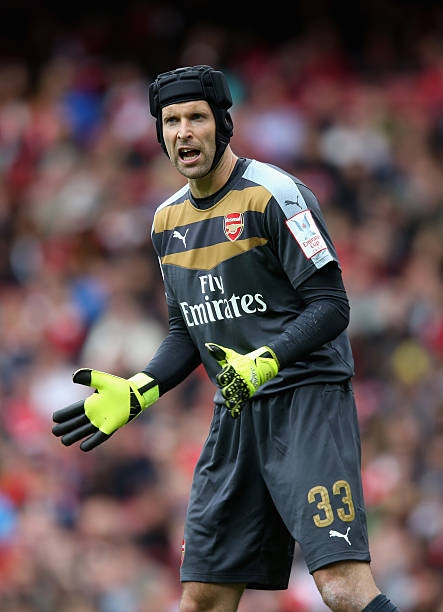 Petr Cech has been wearing a protective head guard for about many years now and he wouldn’t have thought that this would bring criticism to him.

Petr Cech arrived at the Emirates stadium in June 2015 and he has been a great keeper for the gunners up to now because his loved by most gooners.

Football journalist Neal. Collins has accused the Czech Republican international for not having courage because he has been wearing the protective head gear via his twitter account as you can see below.

Arsenal goalkeeper Petr Cech was quite moved by the statement made by the sports journalist and he then responded with this.

So .@nealcol you seriously believe that I’m wearing a HEADGEAR to protect a FACIAL injury ?!! ?? https://t.co/XfSXCs7CUR
— Petr Cech (@PetrCech) November 9, 2017

The gunners were very disappointed with the statement made by the sports journalist on their goalkeeper’s health and made some provoking comments towards Neal Collin who then later apologised to the Arsenal goalkeeper as you can see below.

Petr Cech obtained this injury in October 2006 when he was still at the Stamford Bridge and the keeper collided with Reading’s midfielder Stephen Hunt making the Czech Republican international to be forced to off early before the match, the injury was so severe because it was life threatening.