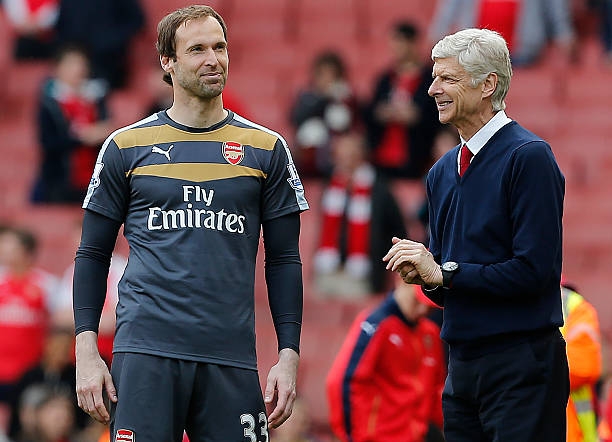 The gunners signed Petr Cech from Chelsea in the 2015 summer, a decision which was welcomed by most Arsenal supporters from all over the world.

Petr Cech has been the gunners first choice goalkeeper ever since he made his transfer to the Emirates stadium because Arsene Wenger believes and respects the capabilities of the Czech Republic international who has been in North London for two years now.

Arsene Wenger has today said a fact which gunners won’t like by saying that Petr Cech might play for more 5 years yet the supporters want the manager to get a young fresh goalkeeper next season or in January;

“He gets older we all do that but as he gets older I think he is fitter than ever. He puts a lot of attention to the preparation, he is slimmer than before. I think he benefits from that.’ the manager is quoted by MIRROR SPORT.

‘I remember Van der Sar at United, I compare them. They are intelligent they have great similar size,similar quality.’

‘And Van der Sar stopped at the end because he decided to stop yet United wanted him to stay one more year longer. I don’t rule it out Cech playing until he is 40 but that will only be down to the performances.”

The gunners have always respected Petr Cech because he is an English Premier League legend but most supporters say that it might be the perfect time their club let go of the Czech Republic international because he has been underperforming this season. Most football analysts say that Arsene Wenger’s squad was complete with only one thing missing being another top goalkeeper who could be helping out ageing Petr Cech in some heated EPL matches.

The Arsenal boss did not say that the gunners will be offering them former Chelsea man a new deal but says that the player still got capabilities of playing up to until he is 40 years old but it seems Arsene Wenger is more than ready to offer Petr Cech a new deal to stay at the Emirates stadium for more years.

The gunners have suffered some embarrassing defeats this season like the 4-0 defeat to Liverpool and even though the whole squad was off form that day, most supporters pointed the defeat to Petr Cech’s poor goal keeping skills for conceding ashaming four goals in one match. Even though Petr Cech has had ups and downs in his career at the Emirates stadium but he has been a leader and mentor to the rest of the young Arsenal players who take him as a role model.

The gunners are playing today against Huddersfield Town today at the Emirates stadium and the manager is expected to field Petr Cech to guard the goal posts of Arsenal.