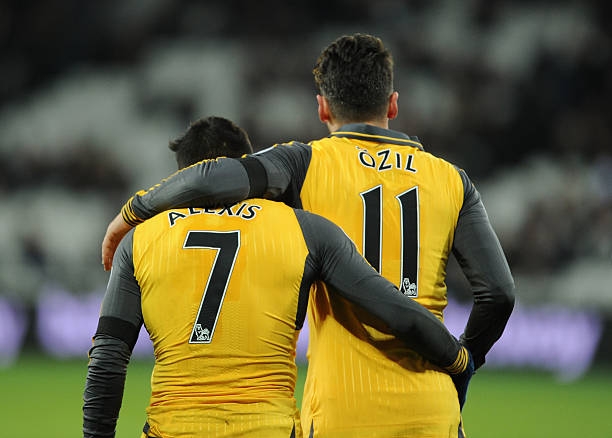 Mesut Ozil and Alexis Sanchez were both very outstanding for the gunners today as they defeated their arch rivals Tottenham Hotspur.

Most Arsenal players including Mesut Ozil and Alexis Sanchez were very outstanding this afternoon because they both contributed so much for getting the three points because they Chilean international scored while the German international made the assist for the first goal of the match.

Arsene Wenger was very happy about the win but released bad news concerning their star duo and says that they are other clubs that want to sign them.

“Everything has to be right, they have to be happy.’ the manager is quoted by METRO.

‘They love the club. They want to stay but other clubs out there offer good contracts as well.’

The gunners wouldn’t wish to hear that there are other top clubs that are interested in getting the signatures of Mesut Ozil and Alexis Sanchez who are yet to put to pen to a new contract but it seems they are willing to go into the last months of their current contract terms.

There has been constant rumours on the future of the two players because they are being linked with a number of top European clubs, there was also a rumour last week which said that Mesut Ozil has been given a whooping offer by Atletico Madrid. The gunners will be hoping that Arsene Wenger tries to convince the duo to stay for more years at the Emirates stadium because they would like to see more of the AOL trio.

Mesut Ozil and Alexis Sanchez have been the pillars of the Arsenal squad so it is no surprise that issues concerning them attracts more attention to the supporters, the duo have helped the gunners win three FA Cup trophies in the years they have spent in London.