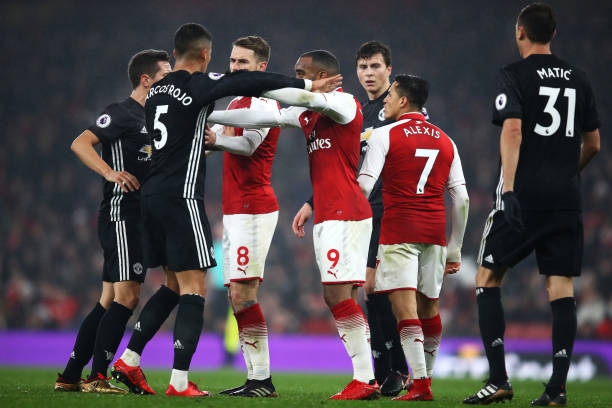 The gunners played against Manchester United today at the Emirates stadium but were surprisingly defeated by the red devils.

The gunners were very happy when the lineups were announced after it was showed that Arsene Wenger had decided to include Alexandre Lacazette but mistakes done in the first 15 minutes proved to have cost them the match.

The gunners conceded the first goal in the 4th minute which was scored by Manchester United defender Valencia with them doubling the lead after 7 minutes after Lingard got the chance to put the ball into the back of the net due a glimpsy defense by the Arsenal defenders.

Arsenal record signing Alexandre Lacazette pulled one goal back in the 49th minute but that wasn’t enough to give the squad more momentum to push for a draw but were then again caught sleeping with same player Lingard scoring their third goal against the gunners which was quite enough to make the supporters lose hope of getting any point in the match.

The supporters aren’t sure who to blame, but some think that the manager was let down by the defense which crumbled in the first 15 minutes of the match hence the match going to waste with Arsenal losing.

1. Arsenal tends to get nervous when playing against Manchester United and did not showed. commitment they showed against Spurs.

2. Arsenal could have got something from this match if it wasn’t for those two early goals which proved to be costly.

3. Arsene Wenger isn’t the cause for this loss because he made a great lineup but was let down by the players.

4. Arsenal goalkeeper Petr Cech isn’t performing as he was doing 5 years ago, he is aging and needs a replacement.

5. The Arsenal defense was off today.

The gunners will now need to focus on their match because they have been defeated by their arch rivals Manchester United.