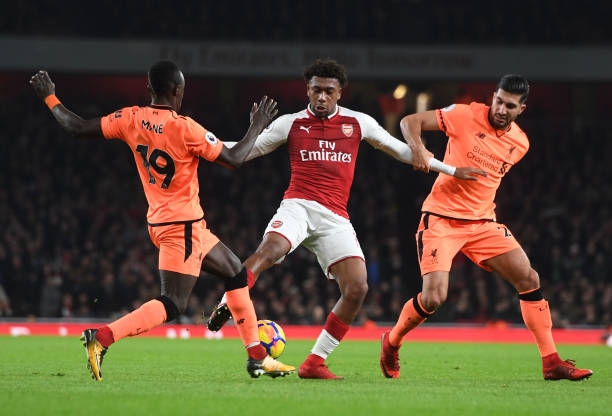 The gunners welcomed their arch rivals Liverpool at their home ground last night hoping to move into the top four but failed because they shared the points.

Alex Iwobi was among the players that were selected in their lineup against the reds as he started as a winger and he had a great performance even though didn’t contribute much for the team against Liverpool.

The midfielder was very impressed with the support the fans showed the team when it was 2 goals down but came back in 388 seconds, scoring three goals in such a small time and here’s what Alex Iwobi said;

“In the second half, we bounced back, the fans were pushing us to go and without that support, we wouldn’t have been able to get the result today.’ the midfielder told arsenal.com.

‘It’s crazy, everything just happens so fast. It’s surreal but we have to believe and it shows how good we are to get goals in that short period of time.”

The Nigerian international believes that the gunners were very outstanding in the 2nd half than in the first half of the match but insists that belief was very crucial for them to get a point in this match, and says it is disappointing that they conceded in the 73rd minute because they were very close to obtaining three points from Liverpool.

The gunners were very worried that they were not gonna win this because they have been underperforming against the top teams. However, the manager decided to start Alex Iwobi in the tough match but most fans believe that it was a mistake because he has always been criticised for his poor finishing when infront of goal but Arsene Wenger still trusts him.

Related Topics:Alex IwobiArsenalLiverpool
Up Next

Bellerin Reveals What Wenger Told Them At Halftime Against Liverpool

Wenger Reveals Why He Started Maitland-Niles Against Liverpool