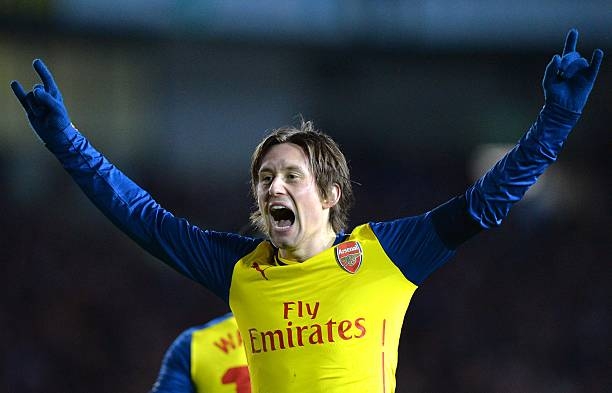 The Czech Republican international has played at various clubs but the time he spent at the Emirates stadium must have been a very special moment for him because he has always said that he will always be greatful to Arsenal supporters for showing great support towards him.

Tomas Roskicky spent many years in London and he became friends with most Arsenal players and some have sent him great messages upon his retirement from football.

PER, OZIL AND MONREAL MESSAGES.

Congrats to a player with a big heart on a great playing career! I wish you all the best for your retirement! ???? #TomasRosicky #GreatCharacter #GreatPlayer pic.twitter.com/bqUBNq8Mnx
— Mesut Özil (@MesutOzil1088) December 20, 2017

Tomas my friend. All the best in your new life after football. One of the best players I played with!! ? pic.twitter.com/mSofh8rtvI
— Nacho Monreal (@_nachomonreal) December 20, 2017

It was an honour and pleasure Tomas to spend these years at Arsenal with you. A world-class footballer, a fantastic and caring teammate and a great friend. Hope to see you soon my friend. #Rosicky pic.twitter.com/Nq2SaQFWse
— Per Mertesacker (@mertesacker) December 20, 2017

The gunners have been a club that has always faced hardships when it tries keeping it’s players fit with Tomas Rosicky being an example because he was always on the sidelines in almost the full season until he finally made decision to leave the club.