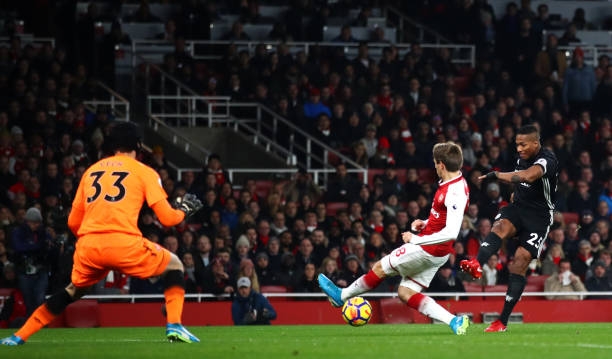 The gunners played against Manchester United yesterday as they were hoping to maintain themselves in the top four but failed after they lost 3-1 against the red devils.

The gunners welcomed the red devils to the Emirates stadium yesterday but their defense was found a sleep in the first 11 minutes hence conceding 2 goals which proved costly for Arsenal.

The supporters were very disappointed with the performance of Arsenal goalkeeper Petr Cech who wasn’t that very effective in the goal posts yesterday because he conceded the first two goals cheaply but the Czech Republican international says that him and the teammates were un lucky;

“It is an unlucky game but we need to make sure that when we create chances in a big game we score and don’t make mistakes which the game was decided by at the start with our two mistakes and they scored.’ The goalkeeper told arsenal.com.

‘We played against Huddersfield and we were on the other side of it. We had a spell where we had four shots and everything went in this time it was the opposite. ”

Most football pundits and analysts alongside some Arsenal supporters believe it is time for Arsene Wenger to begin looking for a new goalkeeper because Petr Cech is aging and isn’t that great anymore as he was when he arrived at the Emirates stadium in 2015.

Arsene Wenger still fully trusts the former Chelsea man because he is an English Premier League legend and he doesn’t want to go in the transfer market looking for a goalkeeper so it is reported that there isn’t goalkeeper on the transfer list of player’s that the manager will be hoping to bring when the Winter transfer window opens in a few week’s time.

The gunners have two main goalkeepers, Petr Cech and David Ospina but the Colombian international doesn’t usually get chances in the English Premier League matches.