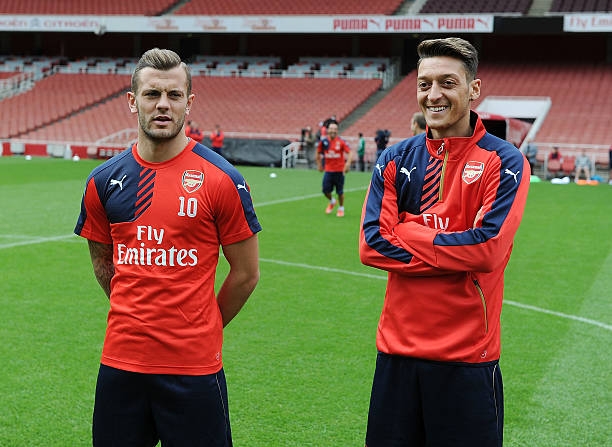 The gunners will need going into the January transfer window with a number of clubs wishing to sign some of their players whose contracts end at the end of this season.

Both Jack Wilshere and Mesut Ozil were among the team that was given a start against the reds last night and both of them showed exceptional performances against Liverpool who made a 3-3 draw with the gunners.

Arsene Wenger was very impressed with the performance of Wilshere and was asked about how he saw his performance and as well as hoe far the contract renewal talks have reached.

“We will see, but as well I think we had four players tonight who have been educated at our academy, with Bellerin, Iwobi and Wilshere they are certainly the only ones at the top, but basically we want to keep these players.’ the manager is quoted by Arsenal’s official website.

‘I think he is one of the players who played with quality in the first half, determination. Jack is never frozen, but what he did in the second half was like the rest of the team, I liked what he did.”

The manager didn’t reveal for sure where the new deal talks have reached with Jack Wilshere but will be hoping that the club begins the talks because the English international is a fan favorite at the North London club even since making his debut at the age of the 17.

Arsene Wenger was also asked about how he has seen the performance of Mesut Ozil in last night’s win and also if they have begun new contract negotiations;

“Ozil had a good game tonight and the second part of your sentence I cannot answer.”.

The manager clearly wanted to avoid questions related to the contract renewal of Mesut Ozil because it is a question he is asked in his every press conference and he seems to be tired of answering it because he got nothing to say about it.

The manager is known as one who doesn’t usually wish to reveal updates about matters concerning transfers and contract renewal deals to the press so he just storms the media by announcing he has done something.

Wenger To Make Move For Defender In January ( Not Luiz )