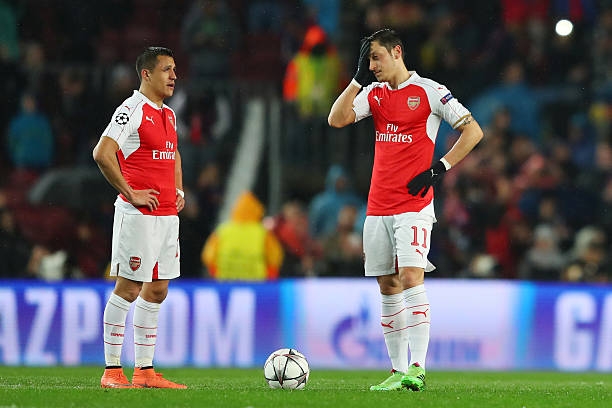 The gunners have for long been trying to convince contract rebels Mesut Ozil and Alexis Sanchez who both seem to have refused to sign new deals with the club.

The duo have been important players at the Emirates stadium and they are fan favourites due to their outstanding performances over the years at Arsenal. The Chilean and German internationals have both haven’t showed any signs that they will be putting pen to a new contract in order to extend their stay in London.

Arsene Wenger has confirmed that he isn’t worried or having sleepless nights because they haven’t signed new deals;

“When you pick a team you do not necessarily look how long a contract is.’ The manager is quoted by MIRROR SPORT.

‘The shorter the contract is. The more hungry the players are usually. The hunger index drops with the length of the contract.”

The manager clearly defends the reason why he isn’t that desperate to convince the two players to extend their contracts with the North London club who clearly wish to keep the two at the club. There are a number of European clubs that are interested in signing the duo like Manchester United, PSG, Manchester United and Manchester City who all are monitoring the situation of these two players at the club.

Most football analysts believe that these two are the backbones of the Arsenal squad because they have helped the North Londoners win three FA Cup trophies since joining the gunners. It is said that one of the two players will likely leave at the end of this season and that one is Alexis Sanchez because he sees it as as ruining his future while Mesut Ozil still loves staying at the club and he is the one that usually responds when transfer rumours usually come up concerning his future.

Arsenal are welcoming their Europa League opponents BATE Borisov and it is said that the boss will start a simple and youthful team which will highly not have Sanchez and Ozil because Arsenal have already qualified.