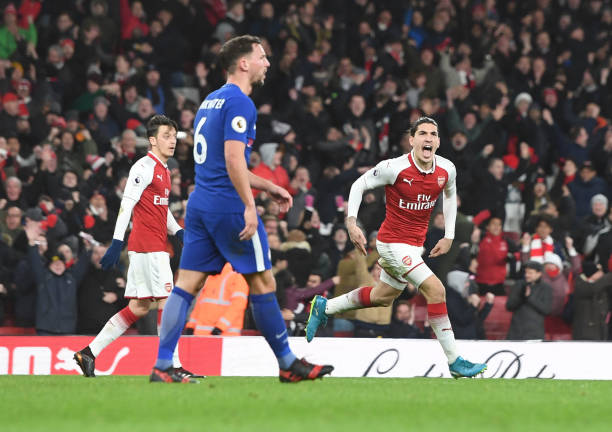 The gunners welcomed Chelsea at the Emirates stadium last night as they begun 2018 with a London Derby which ended in a 2-2 draw after a remarkable performance by the two teams.

The gunners opened up their 2018 campaign with a frantic draw with the blues holding Arsenal to a draw. The match was highly awaited and it begun very smoothly with the gunners dominating the match, having many chances in the first half of the match.

The 2nd half had a lot of action than the first half because all the four goals were scored in the last 45 minutes. Arsenal were the first to break the deadlock after their midfielder Jack Wilshere opened the scoring in the 63rd minute but Chelsea didn’t take long to get back level after getting a penalty which was successfully tapped in by Eden Hazard.

The match was then very competitive as both clubs were level as they looked for match Winning goals and the blues got their 2nd in the 84th minute through Alonso so they looked like were gonna win the match but Hector Bellerin who scored in the last minutes of the match hence the score board reading 2-2.

1. The gunners deserved to win this match because they had many chances.

2. Petr Cech has never saved a penalty when wearing the Arsenal Jersey.

3. This is the 2nd time in a row where there has been doubts in the penalties given to the Arsenal opponents.

5. Arsenal has made two draws with Chelsea in the EPL two legs of the EPL.

The Arsenal supporters were not happy with the draw but it is better than a loss.