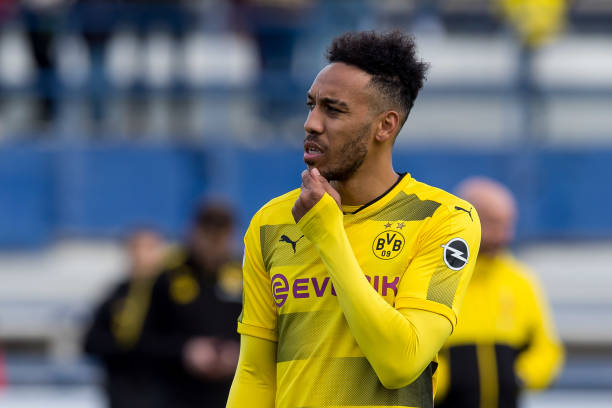 Arsenal are stepping up their pursuit of Pierre-Emerick Aubameyang, with the club’s transfer negotiators having arrived in Germany for talks with Borussia Dortmund.

Gunners boss Arsene Wenger wants to add world class attacking talent to the team and sees Aubameyang, a former team-mate of Mkhitaryan at Dortmund, as the perfect forward to complement the likes of Mesut Ozil and Alexandre Lacazette in the side.

Ivan Gazidis, the club’s chief executive and Huss Fahmy, Arsenal‘s new contracts expert Huss Fahmy and Sven Mislintat, the new head of recruitment who arrived from Dortmund, touched down in Germany on Sunday afternoon in a bid to move talks forward on a deal for Aubameyang.

Aubameyang has endured a frustrating season with Dortmund, peppered with disciplinary issues that have seen him internally suspended on several occasions.

The gunners have for long been admirers of the Gabon international ever since the days he started shining for Borussia Dortmund but they have always been short of money but it seems like this time Arsene Wenger is ready to break the bank in order to bring Aubamayeng at the Emirates stadium.

Breaking News: Mkhitaryan In London For Medical ( With Pictures)