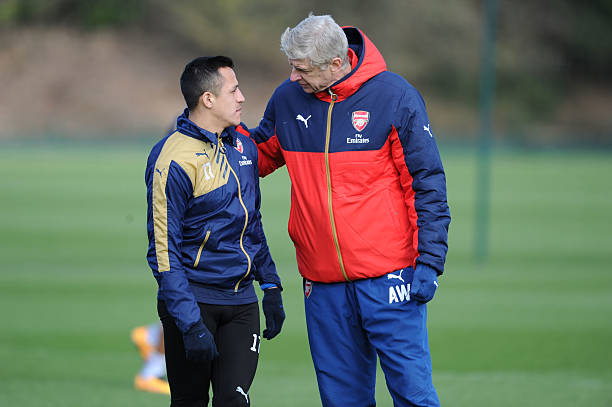 There has been strong speculations on the future of Alexis Sanchez who is being linked with a number of top European clubs but nothing has been decided of yet concerning his future.

Alexis Sanchez arrived at the Emirates stadium in 2014 and the Chilean international has showed how he was a good signing because he has helped the gunners win three FA Cup trophies which isn’t so bad.

There are many transfer speculations and Arsene Wenger cleared the air yesterday on the future of Alexis Sanchez after it was revealed in past weeks that the manager and the Chilean international had an argument in training, the manager said;

“No, it was never a problem inside, there are some people who always want to create problems.’ the manager told arsenal.com.

‘I don’t listen to what he says, or what other people say. We focus on our own problems and that is the only important thing. ’ the manager continued.

‘These people are paid to talk and it’s difficult to always talk, talk, talk and only say things that are true and intelligent.”

The gunners will be very pleased with this news because having an argument between Arsene Wenger and Alexis Sanchez because it could clearly mean that the hopes of the manager beginning new contract talks with the Chilean international would start fading away because the French manager has never revealed the status of the new deal offered to Alexis Sanchez.

The gunners will possibly have a busy transfer window because most teams are putting tabs on their players whose current deals end at the end of this season because they think they can obtain them at a cheap price so Alexis Sanchez is one of the players which Arsenal will be expecting bids for.

Wenger On The Situation Of Ozil And Sanchez