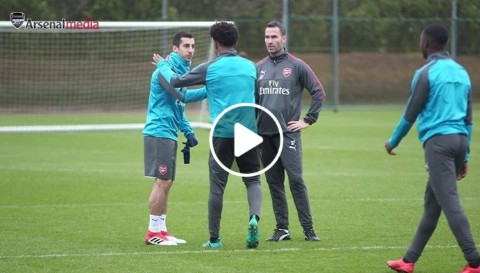 The gunners finalised the deal of Mkhitaryan on Monday and the player is now a officially a gunner and even trained with the gunners on Tuesday.

The gunners are playing against the blues today and the supporters are hoping to see him get his first start today against a top club in order to evaluate his potential.

The new signing Mkhitaryan trained with his new teammates and below is the footage of his first training;

CHECK OUT VIDEO BELOW.

The gunners are currently worried about how the lineup will be being made if the manager wanted to have both Mesut Ozil and Mkhitaryan in the same team but that will be a drama to see how the French manager manages to world class attacking midfielders who both need playing time.

Video: Watch The Funny Thing Xhaka Did After Win Against Chelsea