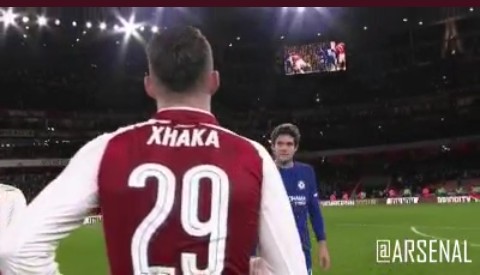 The gunners defeated Chelsea 2-1 today to reach the finals of the Carabao Cup / EFL Cup and will be greatful to Granit Xhaka who scored the winning goal tonight.

The gunners started the latch with a strong lineup which had the Switzerland international in it and he had a pretty nice match because he was great in both defending and attacking which was beneficial for the Arsenal team.

Granit Xhaka was caught on camera doing a something which is deemed funny after he first stood in the same place to watch his beautiful goal, he didn’t wait to first reach home to see it.

WATCH THE GIF VIDEO OF IT BELOW.

When you can't wait until you get home to watch your match-winning goal…Luckily for Granit, we've got a big screen for that ? pic.twitter.com/sYKuVqd67a
— Arsenal FC (@Arsenal) January 24, 2018

The gunners will now face on form Manchester City in the finals of the competition in due course but the gunners will have great confidence after beating Chelsea.

Arsenal 2 VS 1 Video Highlights ( Check Out What You Missed)