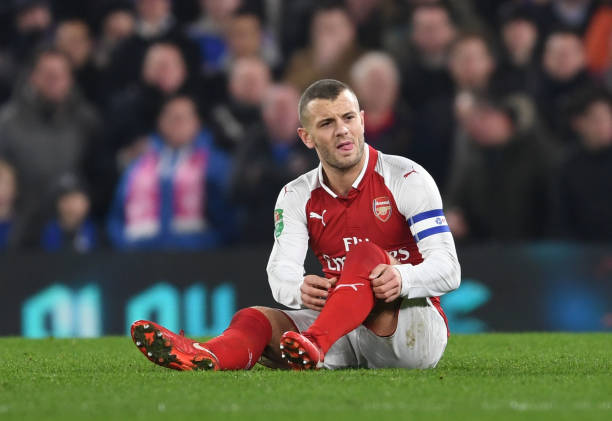 The gunners were welcomed at the Stamford Bridge by Chelsea as they played the first leg of the Carabao Cup semi finals and made a 0-0 draw.

Jack Wilshere was among the players that were selected by the manager to begin last night’s match and did play the match throughly but was then brought out from the pitch in the 2nd half after obtaining what seemed as an injury after he tried to block a cross from Victor Moses.

Arsene Wenger gave the latest update on the injury of the midfielder and here’s what he had to say;
“It is an ankle sprain.From what I’ve heard just now I don’t know If he will be available for Sunday but it’s definitely the ankle, yes” Wenger told Sky Sports.

The gunners and the manager will get frustrated if it is a long term injury because the English international had started getting back to his best but him going to the sidelines will be a major set back for the club and him.

Jack Wilshere has been a player that has been usually getting criticised for being an injury prone, always on the sick bed but the 26 year old has been trying to change that for the past few seasons and it is working out well so the player will get disgusted if the medical reports indicate that he is to be out of the pitch for months.

Reactions Of Arsenal Players On Draw Against Chelsea

Thiery Henry Reveals One Of His  Best Moment, Gooners Will Love It