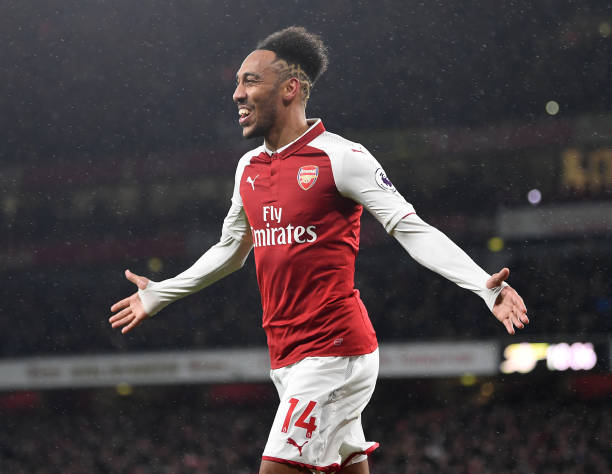 As the gunners finally signed Gabon striker Pierre-Emerick Aubameyang from Borussia Dortmund for a club record £56m. The gunners had two bids rejected before agreeing a fee that exceeds the £46.5m paid for Alexandre Lacazette in July.

Aubameyang has scored 141 goals in 213 games for Dortmund including 21 in 24 matches this season.

Aubameyang who joined Dortmund from the French side Saint-ettiene in 2013 was named the Bundesliga player of the year in 2016,and last season was the German top flight most prolific scorer with 31 goals and he has also played 56 times for Gabon scoring 23 goals.

-He has average 166minutes per goal in his time in Bundesliga ,a rate only Bayern munich’s Robert Lewandowski bettered in the same period (107 minutes per goal)

-He contributed to 172 goals in 213 matches for Dortmund, averaging a goal or assist every 96 minutes
-he scored 66goals more than any other Dortmund player since his debut in July 2013.

( Aubamayeng when still at Dortmund / Getty)

Aubameyang who played his debut match with Arsenal in a 5-1 win over Everton did not have many touches as his teammates (only 25)over the course of 90minutes but Arsenal was encourage by his impact, his pace and movements where stretching the Everton defence. With just over half an hour gone He showed his talent for getting behind opposition defences making 67 sprints more sprints than any other Arsenal player on the pitch.

6- plays a smart reverse pass to Henrikh mhkitaryan whose low cut back is side-footed home by Aaron Ramsey for arsenals opening goal.

13-SHOT! Has his first shot but it takes a deflection to the corner.

37-PACE-Shows impressive acceleration to latch Mesut Ozil through ball but was saved by Jordan Pickford.

57-GOAL! Released by Mhkitaryan and makes no mistake with the finish.

Aubameyang presence has a threat to Lacazette.

Arsenal legend Thierry Henry has urged Arsene Wenger to play both strikers in a 4-4-2 formation as it will bring more attacking treat.

But Arsene Wenger has hinted Lacazette may have to settle for a second fiddle for Aubamayeng at Emirates.

Analysis:Arsenal Europa League Hopes, Ways It Can Lineup And More

Report:Some Interesting Things That Happened In Arsenal Match Against Everton