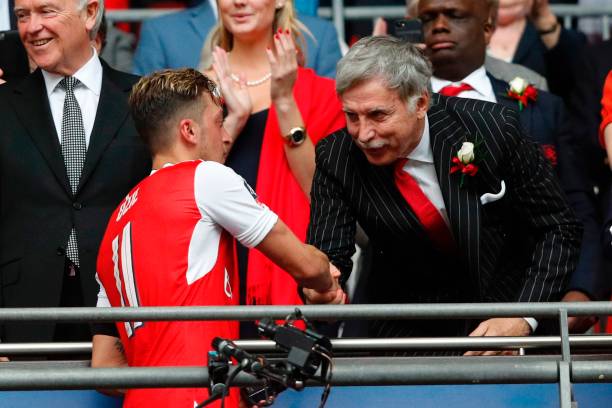 They built a stadium without building an empire , they had the invincible’s only to see them  descend into mediocrity . The revenue stream that runs into millions every year has not been invested over 8 seasons and they’ve allowed the players to become abject and unmotivated.
For a club with such a glorious history , that is financially sound and with a squad full of potential ,  fans have been badly let down for some time.

Arsene Wenger takes the criticism and to a degree that’s his job based on results,  but it’s behind the scenes is where the biggest shake up needs to happen.

It’s no coincidence that since absent owner Stan Kroenke has been in charge and Ivan Gazidis has been CEO , little has progressed at the north London club.

Rewind to the days of David Dein and it’s a whole different story , success or the ability to challenge for it was evident. Arsenal could lure talent from any major club in the World because , like the fans , they could see that it was a move that would bring them glory and prestige.

Although the club has purchased strongly in the last four or so years , they have been very much a ‘make do’ outfit before they moved to the Emirates.

( Wenger and Kroenke out banners / Getty)

The jury is out on if that move was entirely worth it.

In terms of sales and bums on seats it made sense , even if the club had to sell off key assets of which the list appears to be endless.

Yet since the move and apart from a few FA cups , Highbury was a far luckier , happier home and I for one miss it dreadfully.
More than that , I miss supporting a club that had its priorities in the right areas and focused on the team and not sleeve sponsorship.

I don’t like a boardroom that consists of people versed in commodities who know so little about the game or the club.

Arsenal as a outfit are in disarray and in decline and that responsibility is not the managers alone despite the clamour for his removal.

The suits on the board are happy with the club as a sound financial business model  and trophies appear to be secondary at this point.

You only have to look at the opposition to appreciate the differences including near neighbours Spurs.

Although they haven’t won any silverware , they are playing attractive football with a team that is exciting and creative.

That’s something that used to be said of Arsenal but as Gary Neville said recently ” the last bastion has gone ”
So before people start pointing the finger at Wenger , he is not alone in this tragedy , he has accomplices in suits and ties who probably don’t even know the offside rule.
Look at Chelsea , Liverpool and Manchester City and United and you will see the importance of the club first mentality and the profit second.

They are currently breaking away in the premiership and leaving those outside the top six to compete in an almost different league.

Arsenal are now in the Burnley group , no offence. In with teams who aspire to be close but not close enough. That’s the reality of where Arsenal are at present and that doesn’t look like ending anytime soon.

Additional personnel have been added behind the scenes but it won’t be enough because the key changes are required elsewhere , at the very top.

Instead of Wenger out banners perhaps it’s Kroenke who needs to go first for the sake of the club.