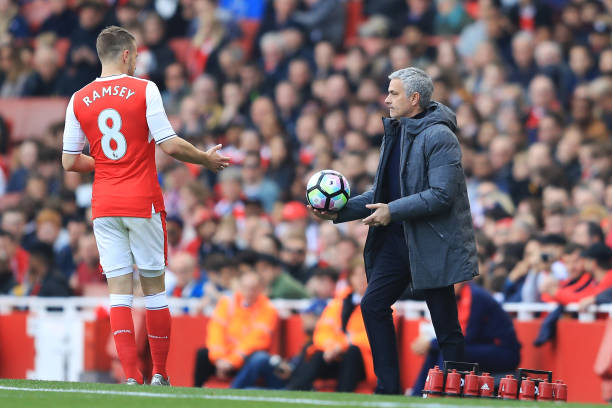 The gunners will be having a big battle with their top notch rivals Manchester United who seem to be interested in most of their stars with Aaron Ramsey being the latest player to be linked with a move to the Old Trafford.

According to a report from Daily Star, United are interested in bringing the Welsh international to the Manchester City in the summer transfer window because their manager Jose Mourinho who has always admired the capabilities of the central midfielder.

Ramsey who is one of the favoured players at the Emirates stadium has just only one more year on his current deal with the Arsenal Team and there hasn’t been any official report whether the team has begun negotiations with him over a new deal and that has lifted the faith of the clubs that are interested in taking him away from the gunners.

It is said that Mourinho would like to sign Ramsey in the summer because he has lost faith in his record signing Paul Pogba who has lost his form in the past few weeks which has prompted the Portuguese manager to begin looking at possible replacements for the French international with Arsenal’s Aaron being the best option.

Arsene Wenger has always been favouring Ramsey over other players so he won’t just let him go in the summer transfer window because he doesn’t have qualified replacements to take over the position if he let’s him join Manchester United.