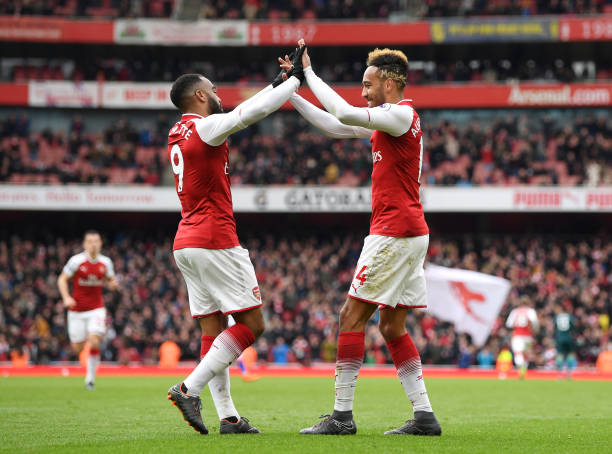 Lacazette The gunners have both Alexandre Lacazette and Aubameyang registered in their record books and the manager has got a hard time selecting who to start matches hence starting one of them at certain matches.

Arsene Wenger is a manager who has never trusted using the 4-4-2 formation because he believes it’s kind of outdated now in this current football world where new formations are being founded and showing good results but it seems the French manager isn’t ready to change his formation just to satisfy the fans by playing both Aubameyang and Lacazette.

Arsene Wenger surprised the Arsenal supporters on Sunday when he released a lineup that had both of the two strikers against Newcastle United but it looked like it was a failed test because the gunners lost that match 2-1 due to poor performance, even though the two forwards showed that they could form a good combination when playing together, it wasn’t that effective in the loss against the Magpies showed that it might not be the right time to try starting them together.

Even though all clubs try to fight this is in between players so that they don’t get jealous but it seems Lacazette and Aubameyang have great friendship because they are always complementing each other on social media and in interviews.

The Arsenal board hasn’t revealed who will be the manager of the North Londoners but the fans hope that he would be one who would try using the two strikers together to form a great attacking force which could finally help Arsenal to win the Premier League for the first time since their triumph in 2004 where they won the trophy without a single loss registered.

Aubameyang, Alexandre Lacazette and Mesut Ozil are the three most expensive players that Arsenal has ever bought so the supporters will be expecting something special next season.

An Overview On Arsenal Vs Manchester United