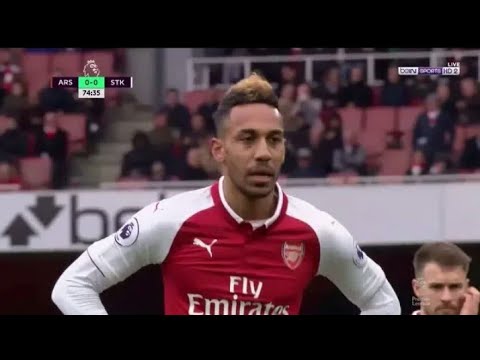 The gunners welcomed the Potters at the Emirates Stadium yesterday as they played their 31st Premier League match and they successfully collected three goals thanks to a double from Aubameyang and one from Alexandre Lacazette to win the match 3-0.

The home fans enjoyed their Easter celebrations with happiness as their team had won the match comfortably because most of the fans left the stadium with a smile on their faces except the travelling Stoke City supporters who left the game with gloomy faces.

We have brought you the highlights of the match even though it’s a bit too late but try watching it if you missed yesterday’s match.

WATCH THE HIGHLIGHTS OF THE MATCH BELOW:

Aubameyang was the first to find the back of the net through a penalty and after doubled the lead moments later with Lacazette closing the chapter with a beautifully taken penalty goal to give the Arsenal team a well deserved three points.