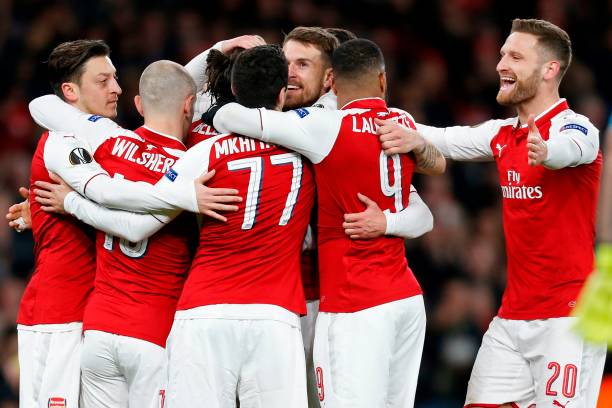 Arsenal played against Russian club CSKA Moscow at the Emirates yesterday and they convincingly defeated them 4-1 thanks to an outstanding performance from the squad.

The whole squad was very mature against their quarter final opponents because the players looked calm on the ball with full of confidence because they knew how CSKA Moscow was certainly going to a walk over at the Emirates Stadium so they will now wait for the real challenge VEB Arena stadium in Russia.

So let’s take a look at the player ratings of Thursday’s Arsenal match against CSKA Moscow at the rate of 1-10.

Didn’t have much to do but was alert when called into action. Conceded one goal but it was too hard for him to save it.

The player wasn’t very sharp on marking some players from the opponent side but tried his best.

The player was very attentive but was the one who caused the free kick which CSKA Moscow scored.

Had a clean decent match.

The Spanish enjoyed his self on the flanks.

The English international was impressive in the match and contributed to the stability of the match.

The midfielder scored a double for the club and he was perfect throughout the match.

The player was very outstanding in the midfield, he was very tough in that area to give his side an attacking point.

The German international was man of the match due to his spectacular performance, won a penalty and made two assists.

Had a great performance.

The striker scored a double which is quite enough for boosting his confidence.

The Arsenal team pulled off an impressive performance which pleased the home fans.