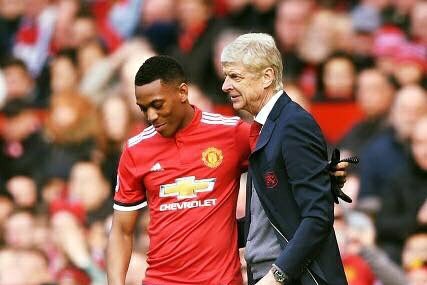 Arsene Wenger announced that he will be stepping down as Arsenal manager and that decision has caught the attention of many people including Manchester United star Anthony Martial.

Anthony Martial has surprised many when he took to twitter to say his farewell to the Arsenal manager who has spent 22 years at the North London club, the red devil tweeted saying tribute to a legend and attaching a picture of himself, and Arsene Wenger.

Tribute to a legend. pic.twitter.com/zJZZXv11OR

The gunners have been heavily linked with the Manchester United star and it’s said that Arsenal have made him their main target for the summer transfer window.

Anthony Martial arrived at the Old Trafford in 2015 but he was first wanted by Arsene Wenger before he went to Manchester but Monaco rather sold him to Manchester United where he has found life difficult due to low chances given to him by Jose Mourinho.

Arsenal Legend Reveals What He Told Wenger After His Announcement