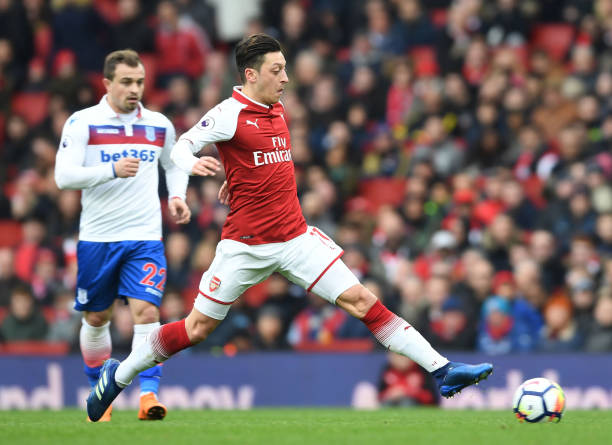 The gunners hosted Stoke City at the Emirates Stadium today and they won the match comfortably thanks to three goals from Aubameyang (2) and Alexandre Lacazette.

As the gunners entertained the potters at the Emirates Stadium, there was controversy when Hector Bellerin made a through ball which Mesut Ozil didn’t get to, so the Spanish came towards the German in frustration and talked to him but Ozil was seen getting angry, and speculated to have told Bellerin that “You speak too much, wait till we get there ( dressing room).

WATCH THE VIDEO OF THAT INCIDENT BELOW

Ozil is looking to scrap bellerin in the changing room ?? ”you speak to much. Wait till Inside” pic.twitter.com/fMwOl5tLOZ

Arsenal fans thought that it was gonna be a big issue as it could have been considered as an argument among the two players but that wasn’t the case because they have unity and friendship.

After the match, Bellerin uploaded a picture on his official instagram with a funny caption saying that when Ozil walks into the dressing room and with smileys as you can see below.

When @m10_official walks into the dressing room… ? love you bro

“We both know you (Bellerin) have no eyes for anything but your precious hair in the dressing room Just kidding! Love you too bro. ”

This now summed up do be an interesting drama between. Bellerin and Mesut Ozil so the fans are happy that it didn’t turn to be a big feud.

Mkhitaryan Wins Arsenal Player Of The Month Award, He Got A Message For The Fans