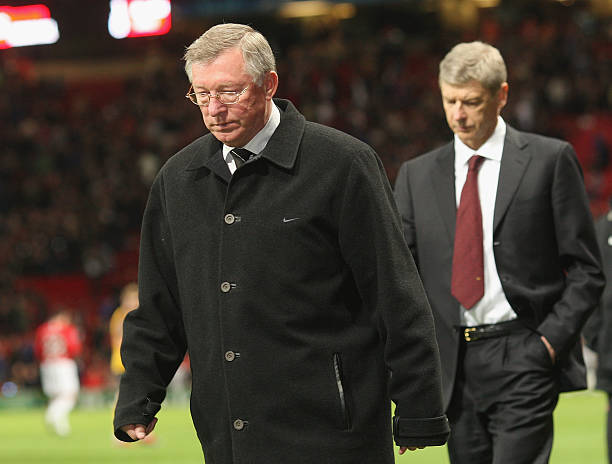 Arsene Wenger has spent over 22 years as Arsenal manager and he has many rival managers and among them was former Manchester United manager Sir Alex Ferguson who retired after few years ago.

Arsene Wenger announced his decision to step down as Arsenal manager at the end of the season, and this announcement has shaken the football world with a number of top football sportsmen sending their tributes to the outgoing manager. Sir Alex Ferguson also said that he is happy for Wenger and said that it was fun being his rival.

Wenger says that there has been some heated moments in his rivalry with Ferguson and said that all that is over now because they can now have a drink with each other;

“Every manager will tell you what that hurts really is losing football game. All the rest, you forget.”

“I had very, very heated moments with Sir Alex Ferguson but today I am very happy to see him and we share a good class of wine.” said Wenger speaking to Sky Sports.

Arsene Wenger has served 22 years in England for the North Londoners becoming the longest-serving manager to have ever managed a club for that long in Premiership but he is going to have two options at the end of this season i.e retiring from managerial jobs or find a new club to manage but he has been quiet on his future in the past recent interviews.

Some of the Arsenal supporters believe that it would be great if Arsene Wenger joined the management of Arsenal instead of moving to a different club.

Related Topics:Alex FergusonArsenalArsene Wenger
Up Next

Bellerin: I Want A Jersey Number Shirt Change Next Season

Wenger Reveals Truth Why He Is Leaving Arsenal