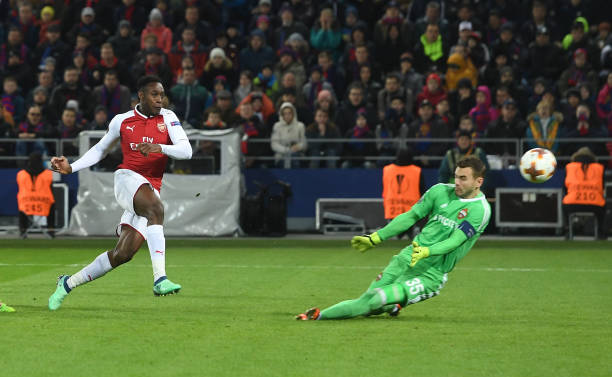 Danny Welbeck has been on form in the past few weeks as he has even netted three goals in the last two matches which has been quite surprising to those who were criticizing him.

The English international was also very impressive yesterday for the gunners as he scored Arsenal‘s first goal against CSKA Moscow, his goal was quite important for the North Londoners because the home side had started pressuring the gooners so much.

Arsene Wenger was also very impressed with the performance of the English international because he has always put trust in him despite all the criticism the forward was receiving from the fans and analysts.

“We know how good he (Welbeck) is and I said that many times. ’ I am happy for him, he surprises some people but he has power, pace. ” Wenger told Arsenal.com.

“He is finishing well now and I believe he is a team player as well. Welbeck likes to help the team and for a striker, that’s an outstanding quality as well. ”

Danny Welbeck arrived at the Emirates Stadium in the last hours of the summer transfer window in 2014 and he has been a great signing who is loved by the fans. He first came as a striker when he came to Arsenal but the manager has been rotating the English man in different positions until he decided to be fielding him on the flanks.

Arsene Wenger will be hoping to see more great performances from the English international in the upcoming matches like the one against Atletico Madrid whom they have been drawn with as their Europa League semi final opponents.