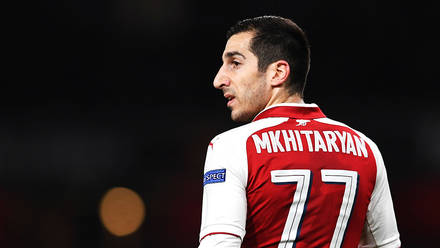 Arsenal midfielder Mkhitaryan got injured last week on Thursday when the gunners had welcomed Russian team CSKA Moscow at the Emirates Stadium.

The Armenian international didn’t take part in Arsenal’s last two matches due to that injury which was previously said to be a long term injury which could keep him out for months but Arsene Wenger has given the official update about that issue.

The manager said that the club has good medical staff;

“He has a ligament strain, he should be out for two more weeks. Do not be worried, we have a very good medical staff and he is very serious in his rehab.” Wenger told arsenal.com.

The Arsenal fans will be happy about this update on the injury of Mkhitaryan because there has been rumours that the 29 year old was going to be out for over two months but will be hoping that he gets well quickly because they don’t have trust in the medical team of Arsenal because it has failed to treat injuries like of Santi Cazorla.

Mkhitaryan’s injyury has been hurtful to most gooners who had started liking him due to his impressive performances and even voted him as Arsenal’s player of the month for March.

Arsenal Star To Miss Rest Of The Season Due To Injury