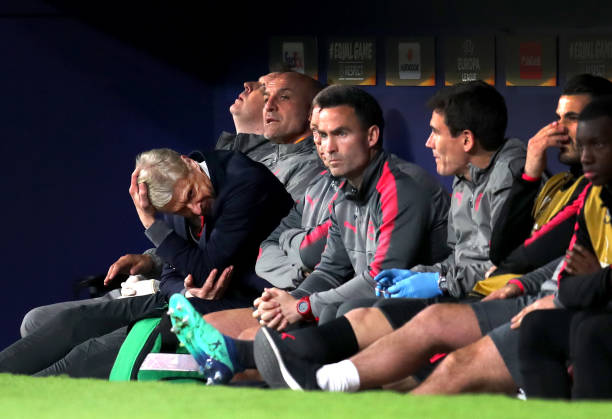 The gunners are having one of the worst seasons in history as they are gonna miss out on the UEFA Champions League for two consecutive seasons and in the past, social media would have been flooded with Wenger out texts/posts but that isn’t the case this time because the manager has announced that he will be stepping down as Arsenal manager at the end of this season.

It is well-known that Arsene Wenger wanted to leave the Emirates Stadium with triumph of the Europa League but he wasn’t able to do this after Atletico Madrid shuttered his plans by eliminating the gunners from the competition on Thursday after a poor performance from the Arsenal players in the first leg of the match so the question will be, who betrayed the fans on the manager and players.

There is no exact definition of a football manager but he is always the main man who makes the main decisions like lineups, substitutions, transfers, mentoring the players and many more others so in simple terms, he controls the club on behalf of the management.

So let’s take on who betrayed the supporters on their Europa League dreams on Wenger and the Arsenal players.

1. Arsenal Players Failure To Score More Against Atletico Madrid at the Emirates Stadium!

Fault: So on this matter, the players were at fault because they failed the manager who had come with a work plan to finish off Atletico Madrid at the Emirates Stadium.

2. RISKING MKHITARYAN AND LATER BENCHING HIM:

It’s no secret that Mkhitaryan has been one of the top performers for the gunners in the past few months but he sustained a knee injury which kept him out for a long time and recently returned before the Manchester United match and Arsene Wenger started him right away in the match where he scored even though the gunners lost.

The Armenian international didn’t look well after the game against his former club because his knee injury wanted to return but it wasn’t serious and the manager had no choice other than to start him on the bench against Atletico Madrid on Thursday.

Fault: Here it goes to Arsene Wenger, the manager shouldn’t have started him in the United match because it was of less importance to them than the Europa League semi final against Atletico Madrid.

Overall, it’s been a very disappointing season for all Arsenal lovers be it fans, players and the manager but what has been hurtful to them is their failure to reach the Europa League finals because they had all their hopes on it.

Analysis: Aubameyang Worth The Amount Arsenal Paid For Him

An Overview On Arsenal Vs Manchester United