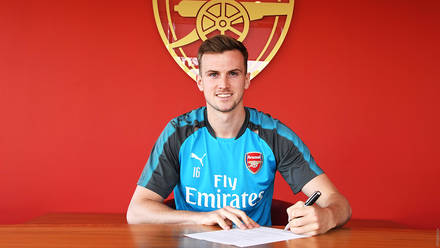 Arsenal young defender Rob Holding has put to pen to a new long contract deal which will see him stay at the Emirates Stadium for more many years.

The club confirmed via it’s official website that the young Englishman will be going nowhere in at least the coming five years, the gunners have been a club that grooms players to become future stars who later grace the football world. The gunners signed Rob Holding from Bolton in the 2016 summer transfer window and this deal was criticized by the supporters who were angry with Wenger signing a young player but Holding has proved them wrong.

Rob Holding was happy to sign the new deal today and took to twitter to thank everyone for his support they have shown him over the last two years he has spent at the Emirates Stadium.

Delighted to have extended my contract with @arsenal. Really looking forward to the exciting years ahead. Thank you for all the support from everyone! #COYG https://t.co/mVMOBdamTj

The young defender says; “Delighted to have extended my contract with Arsenal. Really looking forward to the exciting years ahead. Thank you for all the support from everyone!”

One of the most memorable Rob Holding moments is in the 2017 FA Cup final when the gunners took on Chelsea and the young Englishman kept the blue’s henchman Diego Costa at bay throughout the whole 90 minutes, they even almost had a stand off with the youngster standing up against the fierce Chelsea striker.

Related Topics:ArsenalBoltonRob Holding
Up Next

Cazorla Makes His Say On The Latest About His Contract Renewal