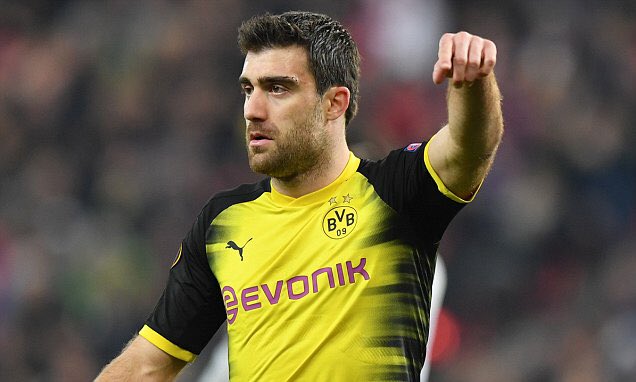 Arsenal are linked with Sokratis Papastathopoulos and the club is said to be on the verge of coming to the Emirates Stadium according to reports.

Borussia Dortmund’s chief Michael Zorc has revealed that a deal for the Greek international to Arsenal is on the cards but it hasn’t been completed yet as reports have suggested. A fee of around £16million is believed to have been agreed with an announcement expected to be done next month.

In an interview with Revier Sport, the Borussia Dortmund chief said;

“He (Sokratis) is likely to go there but things are not finalised yet.”

“I will not give you anything more for the rumour mill. There have apparently been 27 new Dortmund players since the end of May.”

Arsenal supporters have waited for about three weeks for the announcement of the signing of Borussia Dortmund defender Sokratis Papastathopoulos but up to now the two clubs are still quiet but the statement made by Michael Zorc will give some hope that the gunners will be finishing the deal soon.

Unai Emery has made strengthening his defence his main target in this transfer window as he has already brought in Stephan Lichtsteiner from Juventus and is linked with some other defenders aside from Borussia Dortmund’s Sokratis so the manager may likely turn his thoughts on others if the German club aren’t ready to release the Greek international.

Lucas Torreira’s Transfer To Arsenal Is A Done Deal

Report: Ever Banega’s Deal To Arsenal Faces One Obstacle