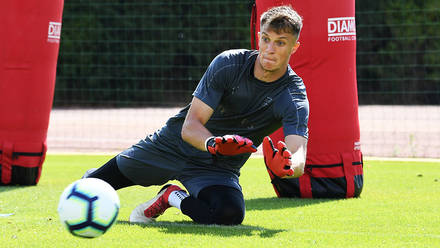 Arsenal have confirmed that Matt Macey has left the Emirates Stadium to join Plymouth Argyle on loan for the rest of the 2018/19 season so that he can gain enough experience because he is just 23-years-old and wouldn’t get enough chances at the club now.

The club announced Matt Macey’s loan move on their official website and the departure of the young goalkeeper doesn’t come as a big surprise to Arsenal supporters because they already have three well experienced goalkeepers – Petr Cech, Bernd Leno and Emilliano Martinez so it was a good decision for the club to let Matt Macey go out on loan at a club where he will receive enough playing time.

Matt Macey arrived at the Emirates Stadium from Bristol Rovers in 2013 and the player has been slowly progressing from the youth ranks up to being a potential first team goalkeeper because he even made two first team appearances for Arsenal last season in their matches against Red Star Belgrade and even their match against Norwich in the Carabao Cup.

Arsenal has sent the youngster on a number of loan moves in the last three seasons because he has went to clubs like Accrington Stanley and Luton Town but the club has wished him a successful season while on loan.