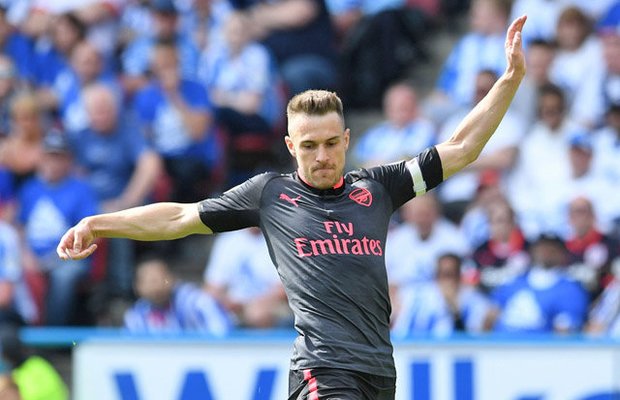 Arsenal midfielder Aaron Ramsey was wearing the captain arm band today for the gunners as they faced Atletico Madrid and this has brought much speculation on whether Unai Emery has chosen him as the captain for the upcoming season.

Arsenal head coach Unai Emery has however rejected the speculations that he has chosen Aaron Ramsey as the next captain as he says that he hasn’t made the decision but said that the Welsh international has the potential of becoming one.

“It’s not yet official, this decision, but I’ve said to you that I want five captains in the team.” the manager told arsenal.com

“Then we will give the numbers for the first, second, third, fourth and fifth. Aaron has the potential to be captain.”

Arsenal fans are also backing Aaron Ramsey to be chosen as the captain of the squad until Laurent Koscielny returns from his injury in December but haven’t been happy about the rumours that the gunners might have Mesut Ozil as their captain in the 2018/19 season.

Aaron Ramsey has never made any public comment on how he would feel if Unai Emery would choose him as the Arsenal Captain for the upcoming season but the midfielder would surely be happy about that because he has shown leadership skills in the last three years at the Emirates Stadium.