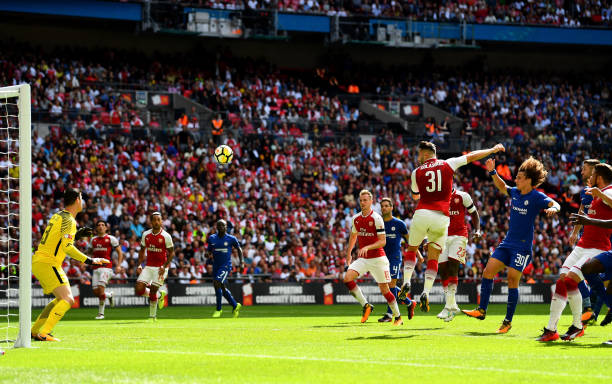 I start off today’s article with a somewhat hilarious news that Arsenal’s coach,Unai Emery has asked his team to lose 1.3kg in weight as there are deemed too “heavy” and not fast enough in pace.He wants his team to cover 28.89km- half a mile more per game, that’s according to the Daily Express.

Arsenal travels to the Stamford bridge for the first London derby this season in the Premier League and a first for the two clubs new managers.Although the two clubs met in preseason,with Arsenal winning the game via penalties, tomorrow’s game will be a different affair entirely.This game will be the second game for both clubs with Arsenal losing to defending champions, Manchester City and Chelsea winning their game against Huddersfield.

For Arsenal tactically, it would be interesting to see how Lichtsteiner cope on the left,and how Emery would fit Aubameyang and Lacazette at the same time on the pitch.With the former coming in from the flanks and the latter being the arrow-head of the attack.We saw the benefit of this tactics on Sunday in the game against City in the second half.It would also be interesting to see who starts in the middle of the park.Torreira is a yes for me but for the two positions in the middle,who starts among the trio of Ramsey, Guendozi and Xhaka.Should Mkhitaryan earn a berth in the starting line up?I am skeptical about that.

For the goal keeping duties,Cech retains his spot in the team after Emery passed a vote of confidence in him.But there’s a catch,Emery wants his team to play the ball out from the back and Cech is seemingly uncomfortable having to play the ball out from the back.He almost scored a ‘freakish” own goal last week.This singular act had Bayer Leverkusen ( Bernd Leno ‘s former club) trolling him (Cech) on their official twitter handle which transited in a war of words between Cech and Leverkusen.Unai’s faith in Cech underlines the simple fact that the coach values experience and nothing more.

I predict the same playing formation adopted in the match against City,a 4-2-3-1 system. While Sarri will be sticking with his “beloved”,4-3-3 formation.

Arsenal has to be weary of Chelsea’s high pressing play. The battle between the two teams will be fought and won in the midfield. Anyone who gains control in that area of the pitch will certainly dictate the pace and complexion of the game.The Chelsea team have a new holding midfielder in the mould of Jorginho,while Kante has been the license to attack.

It is pertinent to note that pace is key.Chelsea is very dangerous in the final third,they take their chances.The Arsenal side also plays a ‘new’ high pressing game,looks dangerous in the final third but don’t convert most of their chances.This means that Arsenal needs to be clinical in front of goal and put the game beyond their not only in the game against Chelsea but in subsequent games.

David Luiz sent off during match against Chelsea

Arsenal also needs to be mindful of the Chelsea’s marauding full backs especially Alonso.Bellerin and whoever plays on the right-wing for Arsenal needs to do a yeoman’s job of ensuring that Alonso does not have a filled day at the “office” tomorrow.
Hazard,Alonso and Kante will be the key men for Chelsea so that means the Arsenal players needs to up the ante.

Unai Emery would be hoping his team improve their away record this term after an abysmal away record last season which was the major reason Arsenal failed to make the top four.Speaking in his pre-match conference to Sky sports on Thursday,he said

“Saturday is a very good option to show our personality ,our capacity against a big team like Chelsea, and away from home,” he added.

“(We) have an opportunity to change last year’s difficulties when the team played away. On Saturday we need to be a more competitive team on the pitch to change these away performances.”

The match is going to give us a clue to how the team(Arsenal) has improved from last week’s rather lethargic and bland defeat to City.The Chelsea team would also afford us the opportunity to see if they are actually title contenders or pretenders.

So until later,Have a fun-filled day ahead!!!