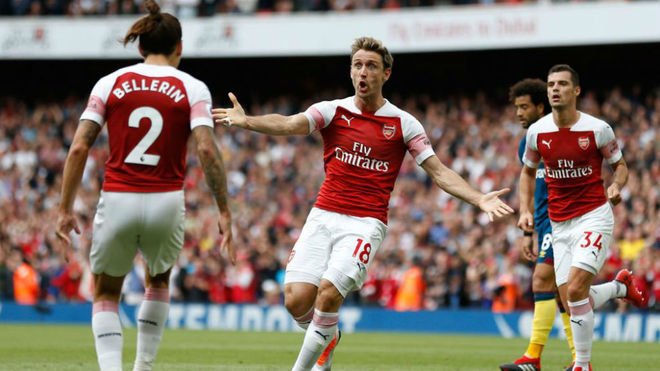 Arsenal has its first win of the season today after it defeated West Ham United 3-2 thanks to a splendid performance from the gunners in the second half as they fought and came from 1 goal behind to beat the hammers 3-1.

Arsenal fans had a bad feeling about this match when Unai Emery selected a lineup which they believe isn’t good because of the losses against Manchester City and Chelsea. The gunners indeed started the match poorly as they were too open and West Ham United took advantage of that as this is how the hammers got their first goal, they made a counter attack and Marko Arnautovic scored through a low shot which went straight to the back of the net.

It didn’t take long for Arsenal to equalise as they also scored their first goal thanks to Nacho Monreal who didn’t waste Hector Bellerin’s cross as he sent a powerful shot past former Arsenal goalkeeper Fabiaski. The first half ended 1-1 after both clubs wasted valuable chances in the first 45 minutes of the game.

Unai Emery made one substitute at the start of the second half,Alex Iwobi was replaced by Alexandre Lacazette and this got the Arsenal supporters excited because they have for long been asking for both of their strikers to be playing together.

Arsenal was better in the second half as they were getting better chances and Unai Emery also removed Matteo Guendouzi from the pitch minutes later to bring in the long-awaited Lucas Torreira.

Both Lacazette and Lucas Torreira improved Arsenal in the second half because the former Sampdoria midfielder tried to stabilise the midfield of the North Londoners while Lacazette assisted Aubameyang in the attack as they pushed for a winner.

Arsenal’s second goal was an own goal after Alexandre Lacazette smartly controlled the ball in the West Ham United box and tried to send a pass to Aubameyang which was blocked by a player of the hammers who ended up scoring an own goal.

The gunners then controlled the match after going in the lead for the first time this season and made more chances until they got their third goal of the day thanks to a neat finish by substitute Danny Welbeck, Hector Bellerin is the one that assisted his goal so the right back contributed to two goals of Arsenal today.

So, Unai Emery goes home a happy man as he gets his first three points in the Premier League.